To billionaire Donald Sterling — the owner of Los Angeles Clippers who was banned, chastised and fined today for racist comments — a $2.5 million penalty may seem like chump change.

And if NBA Commissioner Adam Silver succeeds in forcing him to sell the Clippers, Sterling could way away with quite a bit more cash in his pocket.

“The Clippers could sell — the numbers you’re hearing bounced around are $1 billion to $1.5 billion,” says ESPN.com NBA editor Kevin Arnovitz. “If you’re looking for a glass half-empty here, he bought the team for $12 million. He’s looking at a payday here of maybe $1 billion.”

Weaker teams in smaller markets have sold for $500 million, Arnovitz says, and he thinks the results of this controversy will only strengthen the Clippers’ brand – they’re in the play-offs, playing action-packed games and and they’ve got star players like Chris Paul and Blake Griffin.

Sterling will only have to sell the team if a majority of owners agree to force an ouster — but, in the meantime, the NBA has effectively cut Sterling out of the team’s day-to-day operations. He can’t attend games or talk to sponsors (many of whom have already made it clear that they don’t want to talk to him, either).

In sum, Arnovitz says: “Sterling has to disappear… The product has never been better.This was a cloud and now it seems lifted.” 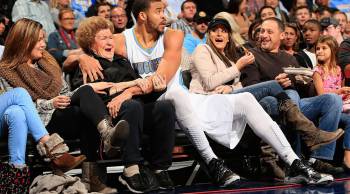