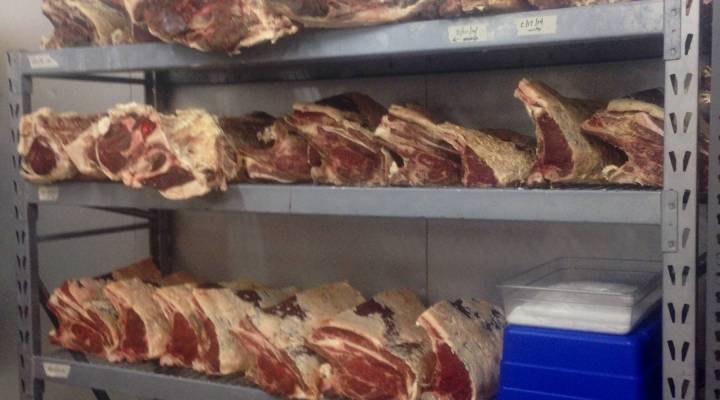 COPY
If you’re a steak and potatoes kind of person, you may have been saying, “Holy Cow!” at the supermarket lately. The price of your protein of choice has been rising a lot. Beef prices rose 5 percent in 2013 and they’re expected to jump by as much as 15 percent this year.
Trevor Bundy is the protein manager at Fleisher’s Grassfed and Organic Meats butcher shops in New York. Bundy is wearing a chain-mail apron and sharpening his knife, getting ready to butcher a beef chuck, the front quarter of a cow.
“I’m taking it apart into individual cuts,” he explains. “This is what we call the Atlantic City strip, this is chuck tender, top blade, shoulder clod, which is a ranch steak.”
Cuts from the front of the cow tend to be less expensive, but they’re still not cheap. In fact, these steaks cost more than 10 percent more than they did last year.
“Retail beef prices are at or near record highs,” says Ricky Volpe, research economist at the U.S. Department of Agriculture. “Really, the story’s pretty simple, and it begins back in 2007, 2008. In both those years, we saw basically every macroeconomic factor that influences food prices start working in the same direction to start driving up food price inflation.”
That would be high prices for fuel and feed, especially corn. The cost of raising a cow suddenly got much higher. At the same time, the global recession had people eating less meat, so ranchers cut back their herds.
Since 2011, Volpe says, fuel and feed costs have fallen and demand for beef has jumped as the economy’s improved and consumers have been more willing to spend. Time for ranchers to beef up their herds, right?
Not so fast, says Vople: “Unfortunately, they have continued to experience external shocks, mostly in the form of weather,” he says. “That has set them back and raised their own costs and their own risks so high that they haven’t taken the plunge towards expanding.”
The result? The number of cows in the hamburger-hungry U.S. is way too low to meet demand says Don Close, a cattle economist with Rabo AgriFinance.
“It’s been pretty dramatic. Total cattle is the lowest we’ve had since 1951 and our cows and heifers inventory is the smallest inventory since 1941. So without a question, we’re working with substantially tighter supplies.”
And increasing supplies isn’t easy, says Close. Cows carry their calves for 9 months and steer aren’t usually slaughtered for beef until they’re around 2 years old. So, we probably won’t see a substantial increase in beef supplies for another few years, and prices are likely to stay high.
Cavanaugh says Americans want to buy more beef, but the best cuts have gotten so expensive, it’s pushing consumers to look for alternatives.
“Customers are  looking for something that is delicious, they can feed their family on, but isn’t as expensive as the giant steak they would have bought just a couple of years ago.” Cavanaugh says his stores are stocking more ground beef, sausages and other cheaper options.
A lot of people are ditching red meat altogether. Demand for chicken has taken flight in the last year—and now poultry prices are rising, too.