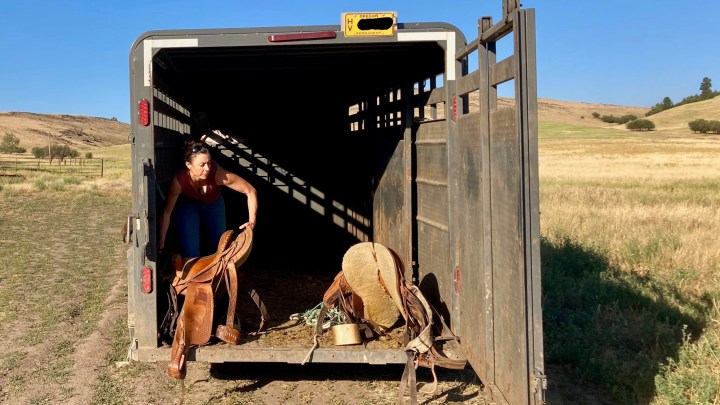 While the price of beef at the grocery store has gone up, ranchers aren’t necessarily seeing a cut of those profits. Four major companies control about 85% of the meatpacking industry in the U.S.

Most ranchers raise cows on their land for less than a year. Then, they’re sold into the feedlot system where they’re fed grain to fatten them up for slaughter.

Once the cow leaves the ranch, the rancher has no control over how that cow spends the rest of its life, where its meat ends up being sold — or for how much.

When Cory Carman took over her family ranch in northeastern Oregon, she knew she wanted to do things differently.

Carman said she was determined to cut out the middleman and have her cows spend their whole lives in her care, eating only grass. But it took time for her to build her business.

“So it’s like all things, right, that it starts out really, really hard,” Carman said.

She started by taking her cows to a local butcher and selling the meat in shares to people in her community. Folks would buy a quarter of a cow or a half of a cow and store it in their chest freezers to eat throughout the year, instead of going to the grocery store and buying cuts of meat like most of us do.

But Carman wanted to go bigger. So, she set her sights on breaking into the fancy urban restaurant world.

“And we would walk in just terrified to these high-end Portland chefs and fancy restaurants that we could never afford to eat in,” Carman said. “And, you know, we’d hand them our little paper-wrapped steak, and they’re like, ‘Oh, we don’t really like grass-fed, but I’ll give it a try.’”

It was a constant hustle, Carman said: raising the beef, figuring out the supply chain — the shipping, processing, marketing. All of it on top of raising three kids. And this was long before COVID-19.

But she kept at it. Carman Beef is now sold in restaurants from Sacramento to Seattle, and by the New Seasons grocery chain. Carman said her company brings in $7 million in gross revenue and buys cows from seven different ranches in the Northwest. All the ranchers agreed to feed their cows only grass, no hormones, and to use minimal chemicals on their land.

The cows go to a small, family-owned slaughter and processing facility, which turned out to be really beneficial during the pandemic. When large slaughterhouses and packing plants were shut down because of COVID outbreaks, the processor Carman uses stayed open.

“Obviously, the pandemic and the supply chain disruptions that it created really exacerbated a lot of these underlying structures and brought this issue to people’s pocketbooks to the kitchen table,” said Claire Kelloway, food program manager at the Open Markets Institute, a nonprofit policy group that researches the dangers of corporate monopolies.

Kelloway said consolidation in the meat industry over the past 50 years has meant that the big four meatpacking companies, Cargill, JBS, Tyson and National Beef Packing Company, hold onto the lion’s share of the profits from higher beef prices.

“They are not passing that on right now. At all. It’s not a connected relationship between the price at the grocery store and the price that ranchers receive,” Kelloway added.

The meat industry disagrees. In a written statement, the North American Meat Institute, a Washington lobbying group, said: “At any given year, depending on supply and demand, the producer may make huge profits, or the packer or the feedlot operator.”

Cattle producers in the Northwest now have another option — they don’t have to sell to the big four. They can sell to Cory Carman’s company.

“The meat company has a mission and a vision, and a group of investors and all of us that work really hard to execute on that get a paycheck every month. I mean, that’s pretty cool,” Carman said.

In a way, Carman created the company she wished she could have sold her beef to when she was first getting started. “And now I run it,” she said with a chuckle.

Carman’s story is featured in a Boise State Public Radio podcast “Women’s Work,” which explores how women are changing the ranching industry in the West.