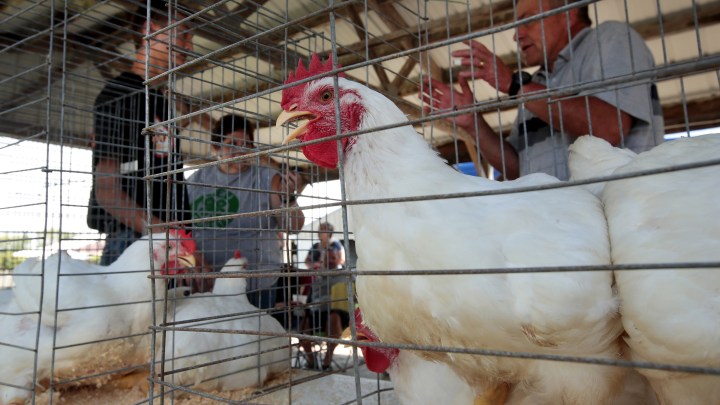 This story was updated on Feb. 14, 2022 with a statement from Tyson Foods that was received after deadline.

The grocery store is arguably where consumers feel inflation most. According to the Bureau of Labor Statistics, meat costs about 20% more than it did in 2021, and analysts expect prices to keep going up before they come back down.

That’s great news for meat processing companies like Tyson Foods, which told shareholders Wednesday that it saw double-digit increases in profits and sales in the last quarter and that its operating income was up 40%.

Tyson is one of the so-called Big Four meat processing companies, which control about 80% of meat production in the United States.

But isn’t Tyson feeling the effects of supply chain disruptions and inflation? And what about those ranchers producing the cows or the folks buying it at the grocery store?

Just a few miles down the road from Tyson Foods headquarters in Springdale, Arkansas, you’ll find Wright’s BBQ, which is owned and operated by Jordan Wright.

He said business is good, but he probably needs to raise his prices soon because of what he’s paying for the raw product.

“You know, when pricing changes on ribs from $1.50 to $2.05 a pound, you know, that’s real margin that you’ve got to then go add to your menu and make sure you’re not losing,” Wright said.

He said he doesn’t feel guilty about passing that on to the consumer.

“A cost to me that you can’t control? You know, that’s not really you sticking it to the customer.”

Wright knows how meat pricing works better than most — he used to work at Tyson and gets why it’s charging him more.

But Stephanie Mercier doesn’t as much. The senior policy adviser with the Farm Journal Foundation said that at the shareholder meetings of big meatpackers, they’re talking about consumer inflation expectations.

“And they were essentially acknowledging in those conversations that they were taking advantage of the general inflation environment to raise their profits,” she said.

Consolidation has led to a lot of pricing power among the so-called Big Four, which includes Cargill, JBS and National Beef Packing.

“I think the evidence suggests that they have taken advantage of the disruption in the economy in general from the pandemic to leverage it, to make use of that market power to raise our prices and to lower what they’re paying up to farmers,” Mercier said.

A spokesperson for Tyson Foods reached out after deadline with the following statement: “Economists and industry analysts confirm that today’s higher meat prices are a direct result of constrained supplies due to the labor shortage, higher input costs for such things as grain, labor and fuel, and strong consumer demand.”

There’s a precise supply chain that gets meat to the grocery store, and there’s currently a bottleneck at meatpacking plants. That’s another reason farmers aren’t benefiting from you paying higher prices, said Jeffrey Peterson, an agribusiness attorney in Minnesota.

“We don’t have the capacity to kill more cattle, and so the demand on the rancher side isn’t the same, and so that creates the disconnect,” he said.

Peterson added that President Joe Biden’s administration has been looking into the pricing practices of the meatpacking industry to try to help solve that disconnect.

Tyson did not respond to Marketplace’s request for comment before airtime. But economists like Lee Schulz at Iowa State University warn against relying too much on one quarter of data to tell us why Tyson’s profits are up.

“These cost increases don’t necessarily happen instantaneously, right? And so looking at a snapshot in time certainly can mask the overall situation,” Schulz said.

And, he said, retail prices adjust more quickly going up than coming down. So even if margins normalize, you might not immediately see that at the store.