At Covered California, a state-run exchange,  the computer works, 10,000 applications are completed every day, and nearly a quarter of all customers are 18-34 years old – the coveted young invincibles.

There’s no reason to mess with that.

Perhaps that’s why California said Thursday it won’t be among the states doing a 180,  and letting people keep their cancelled policies for another year.

If people were allowed to keep those bare-bones policies, especially young customers, they might stay away from the exchanges.

“Now premiums go up, because premiums have to cover the cost of providing healthcare for this sicker population,” he says.

Some states are still deciding whether to let insurers renew plans that don’t meet certain standards set out by the Affordable Care Act, like covering pre-existing conditions and out-of-pocket spending caps.

And insurers are deciding whether they want to reissue those canceled policies.

Professor Sood isn’t sure there’s much incentive for the companies to sell bargain basement coverage anymore.

“I think with the new rules, you can sell a Toyota Corolla at full price to consumers. Or you can sell a BMW where the government gives you a 50 percent discount,” he says.

Not all insurers sell plans on the exchanges, so those firms could make money if they peel consumers away.

But Drexel University Public Health Professor and author Robert Field says he thinks most companies are playing the long game.

“When you cut through all the politics, they are getting tens of millions of potential new customers. And the government is requiring many of those people to buy their products,” he says.

Field says if insurers can extend the canceled policies only another 12 months, there’s not much to be gained.

The real action, he says, is on the exchanges. 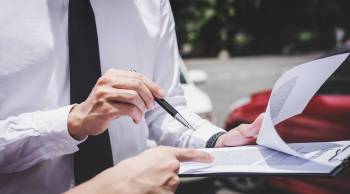 Why are auto insurance premiums growing more slowly in California than elsewhere?