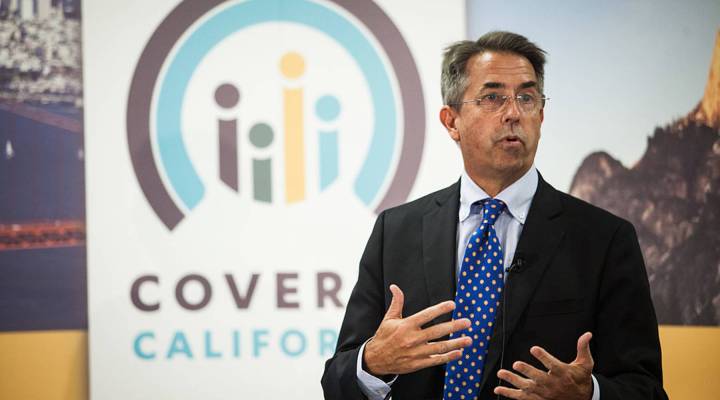 COPY
“All health coverage is not created equal," says Covered California Executive Director Peter Lee. "A key question we all need to look at is: Are we going back to the days of skimpy benefits?” Max Whittaker/Getty Images

“All health coverage is not created equal," says Covered California Executive Director Peter Lee. "A key question we all need to look at is: Are we going back to the days of skimpy benefits?” Max Whittaker/Getty Images
Listen Now

Now that the Senate health care bill has been released, it’s being digested by all the relevant interested parties. Some of those interested parties are people running the state health exchanges created under the Affordable Care Act. Peter Lee is the executive director of Covered California, California’s health exchange and the first created after the bill became law back in 2010. He talked with Marketplace host Kai Ryssdal about the health care policy conversation in Washington. The following is an edited transcript of their conversation.

Kai Ryssdal: What’s it been like for you the past, what I don’t know five, six months since the inauguration, trying to run essentially a health care business with the uncertainty in health care policy that’s going on?

Peter Lee: Well, here in California, we have 11 health plans participating in the individual marketplace, and we have a lot of stability because we can make things work for consumers and for the health plans. So it’s been relatively stable. But around us, there’s a huge amount of froth and churn that we’re trying to navigate.

Ryssdal: Explain that a little bit, would the froth and the churn? Because, as I’m sure you know, the health care bill from the Senate came out this morning, there’s the House version that’s going to have to be reconciled, and there is so much that you can’t possibly know about how this is going to go.

Lee: Yeah, there’s a couple of things. First, right now, we’re sitting down and negotiating for 2018 and health plans have been uncertain if they’re going to get paid a major part of a subsidy for the federal government called cost-sharing reductions. So, in California we said, “Let’s take it off the table.” We’ve given the plans a way to build the cost into their rates and make sure the federal government still pays for it. So, there are ways to negotiate and navigate these choppy waters, but on some levels what we’re seeing right now with the Senate bill release is very choppy waters coming down the future for millions of Americans.

Lee: Well, there’s a number of things this administration has done, which in some ways are encouraging health plans to leave the market that’s already unstable. At the same time, I want to give a tip the hat, the secretary the treasury and the IRS issued a policy saying they will continue to enforce the mandate. This is the law. And I think that’s what we all, as Americans, need to hold them to.

Ryssdal: The mandate, of course, being the individual insurance mandate that was part of the Affordable Care Act. And we should say here that you worked in health care in the Obama administration. What is the best-case for you in the next six months to a year in health care in this country?

Lee: The best case for the next six months is — remember, there are millions and millions of Americans that have coverage today that did not five years ago. But also, millions of Americans have the peace of mind that if they get sick and they’ve got health insurance, when they show up it’s still there for them. So, the last thing we want, I think anyone, is to go back to the bad old days of health care where you had an insurance card but whoops, sorry, we don’t cover cancer. And that’s the prospect of what we’re seeing right now with the Senate health bill.

Ryssdal: Is that what you’re anticipating then, that some version of the Senate or the House bill passes and these changes come to pass?

Lee: I’m not the right guy to game are they going to get 50 votes or not. If it does, millions of Americans are guaranteed to lose coverage and millions more are going to be facing coverage terms that are a lot more onerous then they have in the past. And that’s one of the main things I think we all need to look at is the CBO next week is going to come out estimating the impact of this bill, and they’re going to look at how many people are going to lose coverage. But all health coverage is not created equal. And a key question we all need to look at is: Are we going back to the days of skimpy benefits? Meaning, people have coverage in name only and can’t get access to the care they need.