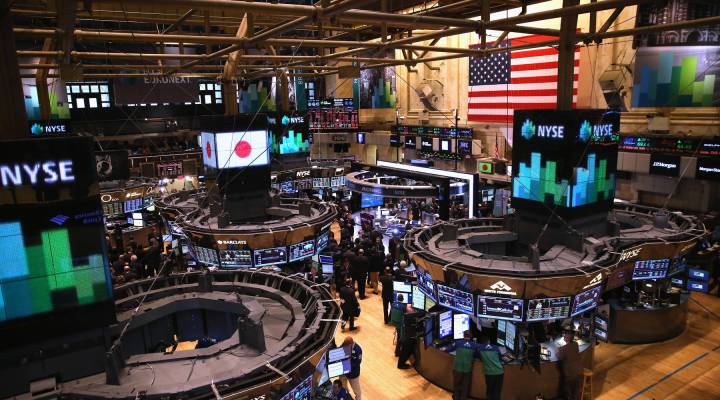 It is a big deal, if you are an investor or trader or reporter or business pundit — you get to jump up and down and refer to 16,000 as a “milestone,” a “barrier,” and a “cause for celebration.”

But the millions of Americans who still unemployed, or underemployed, or earning flat wages aren’t celebrating. More than 50 percent of Americans own no corporate stock – even indirectly – so they aren’t popping the champagne either.

The Dow 16,000 party is confined to corporate America: That is, the people who run public companies and own shares in them. They’re really the only people who should pay close attention to what the Dow is doing on a day-to-day basis. For most Americans – and it is most Americans – 16,000 is just another number.

So what number should we be paying attention to?

At the time of writing, the number we should really be celebrating is 2.68. That, ladies and gentlemen, is the yield on the ten-year treasury note.

Yes, I know, bonds are a bit like the PC guy in those old Apple ads. They’re boring, they’re all gray and pinstriped, buttoned-up and besuited.

Stocks are where the fun is at: They’re bouncy, colorful, exciting. You never hear about a bond “pop” when its issued, do you? Most Americans probably don’t know if Twitter even has bonds. You certainly never hear about dizzying run-ups or heart-pounding freefalls in the bond market. The bond market’s nickname is ‘fixed income’ for goodness sake!

And the ten-year T note? It’s the grayest bond of all. It’s quoted by every financial news organization, including this one, every day. It’s part of the furniture: Like that weird bird sculpture on the mantle that your Aunt Edie gave you as a wedding gift.

Except that number, the yield on the ten-year T note, is made of gold (you should get that sculpture valued, by the way). The ten-year yield is hugely significant because as it changes, almost every number in the financial world adjusts.

Mortgages, credit card loans, corporate interest rates: The movements in the ten-year yield govern every aspect of our individual and corporate lives.

The Fed has pumped $2.3 trillion into the economy with the aim of keeping the yield on the ten-year note low. Why?

Because it helps save the economy. It keeps our borrowing costs down. If companies find it cheaper to borrow, then they’re more likely to take the risk to expand, and people are more likely to buy more stuff. That in turn pumps more money into companies that will hopefully then go out and hire more people. Those people will hopefully then go out and buy more stuff, and so on and so on, until the economy returns to the very picture of health.

So if you want to watch the health of the economy, you’re better off watching the yield on the ten-year than you are checking out the Dow.

Why? Because if the Dow rises or falls, that’s just telling you how American public companies are doing. A movement  in the ten-year note, on the other hand, gives us insight into how every American is doing. And that’s the real economy, right there.