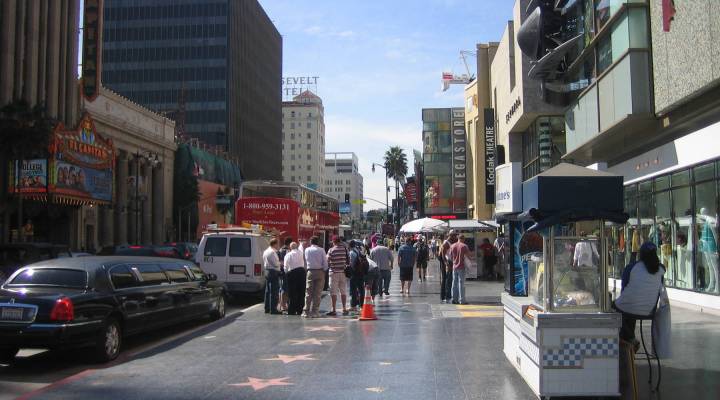 Buying your way onto the Hollywood Walk of Fame

Buying your way onto the Hollywood Walk of Fame

Forty years after she died, rock-and-roll legend Janis Joplin today will get her star on the Hollywood Walk of Fame.

The Hollywood Chamber of Commerce, which runs the walk of fame, is expecting a big crowd for the dedication, though throngs of visitors can be found exploring the sidewalk any day of the week.

“Hollywood is magic for all people in my generation,” tourist Daniel Aruajo said while standing on Matt Damon’s star. “I grew up seeing movies from Hollywood in Brazil, and that’s my childhood, my adolescence.”

But when Aruajo found out that getting a star on the Walk of Fame entails paying the Hollywood Chamber of Commerce $30,000, he didn’t find it so magical.

“You’re breaking all my dreams,” he said.

There’s more to the Walk of Fame than a sidewalk and a person’s name. Movie studios, fan clubs or anyone can raise the funds for a star. That $30,000 goes to the Hollywood Chamber, which uses the fee for installation and upkeep. But it’s not just money behind the scenes. Seeing an idol’s name in brass and pink terrazzo is all about timing too.

“A lot of times, the average person might not connect that you’re seeing a picture of Julianne Moore getting a walk of fame star, and that her movie Carrie is coming out in a couple of weeks,” said Amy Kaufman, a staff writer at the Los Angeles Times. “But  the studios put a lot of effort into timing these things just right so it seems like a publicity blitz.

The buzz surrounding a star dedication could likely be worth millions of dollars in marketing exposure. But the Hollywood Chamber doesn’t hide that this is a marketing tactic.

“It’s hype. Hollywood is all about hype. We help promote our community and this is the way we do it. And it brings a big tourist group,” said Ana Martinez, who has run walk of fame operations for two decades.

Every year the chamber gets 200 to 300 submissions, and picks around 20 stars out of that. Janis Joplin’s family nominated her.

The star dedication is timed to coincide with a Broadway musical about the singer’s life, “A Night with Janis.”

Back on the boulevard, Joplin’s famous tune “Me and Bobby McGee” blares out the front door of a packed Irish-themed bar during happy hour. Love this scene or hate it, the Hollywood Hype machine works. Over 10 million people visit the Walk of Fame every year. 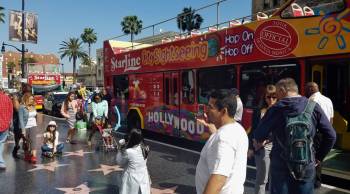