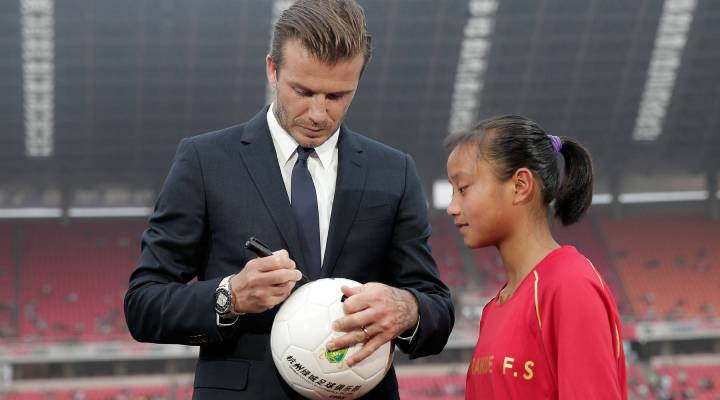 COPY
David Beckham signs for young fans during his visit Hangzhou Huanglong Stadium on June 22, 2013 in Hangzhou, China. Now you can get Beckham's signature on Facebook. Lintao Zhang/Getty Images

David Beckham signs for young fans during his visit Hangzhou Huanglong Stadium on June 22, 2013 in Hangzhou, China. Now you can get Beckham's signature on Facebook. Lintao Zhang/Getty Images
Listen Now

Retired soccer star David Beckham is releasing a self-titled book, of photographs taken of the athlete throughout his career. Beckham is pairing with Facebook for what they’re calling a “global book signing,” in which Facebook users can register to view the author’s book release online and then receive a copy of Beckham’s digital signiture on a Facebook wall.

As the popularity of e-books has grown, so has the emergence of e-signatures. Evan Jacobs, founder and CEO of Authorgraph, a service that lets authors sign e-books for readers, has signed up nearly 8,000 authors to his service including E.L. James of the blockbuster “Fifty Shades ” trilogy. Jacobs, a software engineer, came up with the idea for Authorgraph during a book signing in Seattle two years ago.

“The author was reading from his book and he said, ‘ok, everyone come up and get your book signed,'” said Jacobs. “And I was like, what do I do? I have the book on my Kindle. I don’t have anything for you to sign.”

Still, an athlete’s digital signature doesn’t have quite the same cachet as a hand-signed ball or jersey, says Matt Federgreen, owner of the Beverly Hills Baseball Card Shop, who just last year sold several soccer balls bearing Becks’ signature for around $200. Federgreen says an e-signature isn’t worth anything. And, he says, for many people, meeting the athlete in person is what really counts.

“You don’t have a [memory] of meeting the athlete,” Federgreen said. “I remember when Muhammad Ali was signing, people waited hours for their five or ten seconds in front of Muhammad.”