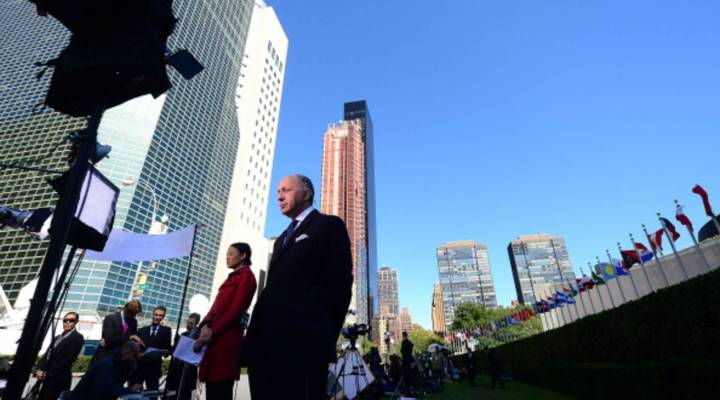 UN has made progress, but more work needs to be done to meet 2015 goals

COPY
French Foreign Minister Laurent Fabius (C) gets ready to do a live television interview in front of the United Nations headquarters ahead of the start of the 68th UN General Assembly, in New York, September 23, 2013.  EMMANUEL DUNAND/AFP/Getty Images

UN has made progress, but more work needs to be done to meet 2015 goals

French Foreign Minister Laurent Fabius (C) gets ready to do a live television interview in front of the United Nations headquarters ahead of the start of the 68th UN General Assembly, in New York, September 23, 2013.  EMMANUEL DUNAND/AFP/Getty Images
Listen Now

The United Nations General Assembly kicks off later this morning with a speech from President Obama. One item on the agenda for global leaders this week? Discussing progress in reaching the so-called Millennium Development Goals, which were set in 2000 to be met by 2015.

“The UN General Assembly will discuss these eight goals and ask how much progress have we been making in areas like poverty and maternal mortality and child health and so on,” says Charles Kenny, senior fellow at the Center for Global Development in Washington D.C.

Kenny* says a fair amount of progress has been made. “Look at the first development goal on the number of people worldwide who are living on $1.25 a day,” he says. “Back in the 90s, that was around half the population, now it’s about 20 percent.”

Other goals, like reducing infant mortality have been slower going.

“A lot of the information we found in analysis of this millennium development goal issue is that progress has been great but uneven,” says Johanna Mendelson Forman, scholar in residence at American University’s School of International Service.

The financial crash took a major toll on meeting the goals, says Forman. There’s still a lot of progress to be made in areas like fighting HIV and reducing greenhouse gas emissions.

*CORRECTION: The original version of this article misspelled Center for Global Development senior fellow Charles Kenny’s name. The text has been corrected.