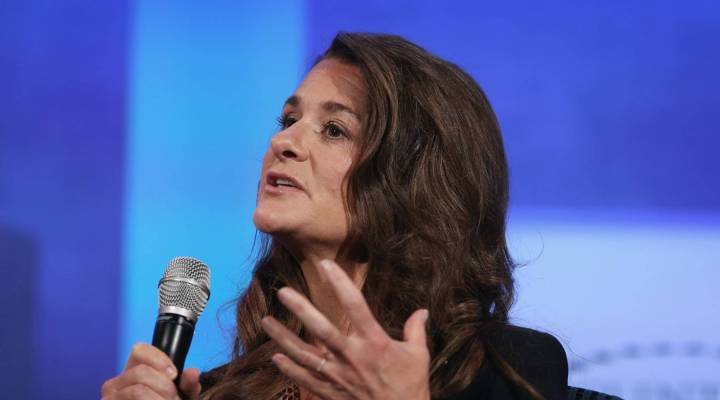 In 2015, the United Nations General Assembly released a list of 17 global goals that were designed as a blueprint to bring more peace and prosperity to the world. These so-called Sustainable Development Goals called for things like no poverty and hunger, good education, gender equality and economic opportunity for all by 2030. Halfway to that point, the world is on track to achieve exactly none of these goals.

The Bill and Melinda Gates Foundation issues its annual “Goalkeepers” report in order to track progress on these objectives. This year’s report, which came out last week, finds that to reach these goals, we need to drastically change our approach. And while COVID has played a role in the slow rate of progress, foundation co-chair Melinda French Gates says that it shouldn’t be an excuse to forgo the work that still needs to be done in areas like gender equality.

“One of the things that happened during the pandemic that was very fortuitous, you know, as many governments … put cash in the hands of families,” said French Gates in an interview with Marketplace’s Sabri Ben-Achour. “But what we saw is that if you don’t make sure that the cash actually gets into a woman’s wallet — and honestly into a digital wallet or into her bank account — you’re not going to make a profound difference for her.”

Sabri Ben-Achour: So we have these lofty – super lofty – goals: Zero hunger, quality education, affordable and clean energy. By the U.N.’s own admission, these goals are not being met. The U.N. emphasizes how disruptive COVID has been to these goals. But you write that blaming COVID alone is a cop-out. Why?

Melinda French Gates: Well, I think we have to look at, first of all, there was incredible progress before COVID. Poverty had gone down, malaria deaths had gone down, children under five were surviving to their fifth birthday, far more of them. However, COVID disrupted many, many things. But we weren’t going to get there on some of these goals to begin with. Just take gender inequality — it exists all over the world, and yet now it’s gotten even worse with COVID. But it’s because we weren’t really investing in some of the root causes on gender [inequality]. And I think we’ve realized that now with COVID. If we don’t really put this on the front burner, and really address the root causes, we’re never going to get to gender inequality.

Ben-Achour: Speaking of gender inequality — that’s one of the items you’ve tackled — and you’ve written, we really need to change our thinking there. Can you give us an example of how thinking should change?

French Gates: Sure, so one of the things that happened during the pandemic that was very fortuitous, you know, as many governments realized they needed to put social protection payments in place — and they did that, they put cash in the hands of families. But what we saw is that if you don’t make sure that the cash actually gets into a woman’s wallet — and honestly into a digital wallet or into her bank account — you’re not going to make a profound difference for her. She needs to actually have full control and decision-making authority over that money — when to spend it, where to spend it, whether to save it. So often the cash would go into the hands of a man, or she would get the cash but then he would control it. So we’ve got to work on those root causes on those root issues of, “Does she have full decision-making authority over the cash?”

Ben-Achour: You know, are there not — in some cases — cultural obstacles? I refer to the U.S. as well, you know, systems of belief that a check, even properly targeted, isn’t going to dismantle super easily?

French Gates: Well, there are all kinds of systemic barriers that hold women back and all over the world. And we need to name those, and we need to work on those. One thing I will say, though, is that we do know that when a woman has access to her own finances, she begins to change social norms inside of her own family. So I think we have to work on a whole bunch of issues. And we have to make sure that, you know, women have decision-making authority, they have a seat at the table, not just to decide what happens on who eats, but what decisions get made at the table. And they need to have a place at the policymaking table. Not just be recipients of policy, but setting policies in their countries.

Ben-Achour: Childcare is one of the ways you point out to sort of free women up from responsibilities that they disproportionately bear in many places. You argue there is an economic incentive for society to provide help with childcare. Can you explain that?

French Gates: So a woman spends over half of her time on unpaid labor, and that’s often childcare if she has a child in the home, sometimes it’s elderly care. That is care that, you know, part of it she wants to do, it’s the loving care we do, but a lot of it is chores and work. And so if we have good childcare policies so that women can have help with that, and their husbands take a little bit, or their partner a little bit more responsibility, then we free them up to be able to do the things they want to do in the workforce. And that contributes overall to our economy. So it’s a good thing, both for the family and for her income, and for the economy at large.

Ben-Achour: Let’s shift gears real quick and talk about rethinking hunger, 30% of Africa’s crops are going to be grown in climate conditions that will significantly reduce how well they grow their yield. This is on a continent that imports most of its food, nearly three-quarters of its grain. How do you solve that? How do you rethink that?

French Gates: You make sure that they have the seeds that they’re asking for: seeds that are pest resistant for their specific areas, seeds that are drought resistant because we know that you know the Sahel is moving down, and seeds that are flood resistant. The rains are coming at different times. And when they come, they’re coming in [a] deluge. Those seeds are being created with African input and they exist. But then we also need to make sure that we have the seed system working and the agri-dealers so that they’re also reaching women. Half of the farmers in Africa are women. But if we just put the seeds through the normal system, they’re going to reach half the farmers which are the men, and not reach the women. So that specific programming we have to do as well.

Ben-Achour: You know, it’s easy – I think it’s easy – for people to be cynical about giant goals like you know, no more poverty. Just think that’s too big, it’s not really solvable. Are there examples of big goals you can point a skeptic to that the world has met in our lifetimes?

French Gates: Well, in our lifetimes, we have eradicated smallpox. It’s a disease that if you go back just one generation, people remember people who had smallpox, you even see, you know, pox marks on people’s faces. We don’t have that anymore. Anywhere in the world – we eradicated that disease. So it is possible when the global community comes together and says, “We’re going to get rid of this,” to actually do it.

Ben-Achour You know, as you outline ways we need to rethink our strategies for achieving these various goals to reduce human suffering, what is the latest the Gates Foundation is doing to promote this kind of rethinking?

French Gates: So this week, with the U.N. Sustainable Development Goals being highlighted, the foundation is going to make over a billion dollars of commitments and investments on behalf of others. Those are to things like the Global Fund, which fights AIDS, tuberculosis and malaria. We’re making commitments around hunger because there’s so much need right now. And as well, we’re making commitments to African institutions, such as the University of Global Health Equity in Rwanda.