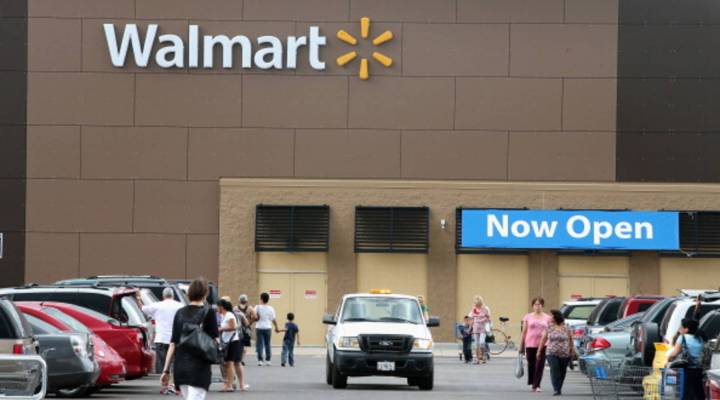 What’s not in your cart at Walmart? Produce, electronics, toys…

What’s not in your cart at Walmart? Produce, electronics, toys…

Walmart reported earnings today and it was not pretty. The world’s largest retailer said sales were down and it cut its profit forecast for the year. Walmart said its customers have been cutting back because of high gas prices and the rise in payroll taxes. Walmart is often considered to be bellwether of sorts for what middle- to lower-income consumers are and aren’t buying. So we thought we’d journey to the center of a Walmart shopping cart and see what shoppers were snapping up and what they were leaving on the shelves.

Overall, that journey will be shorter than it used to be, says Brian Yarbrough, a consumer research analyst at Edward Jones.

“They buy basic needs, new T-shirts and some new underwear, but as far as stretching and buying new pants and a nicer shirt, I just don’t think they’re doing it,” he says.

Yarbrough says in the Walmart cart: absolutely-have-to-have clothes and some home necessities. Out of the cart: electronics, toys, sporting goods and seasonal items (don’t expect to see bicycles, Xboxes or patio furniture).

And don’t expect to find a lot of produce in a Walmart cart. “People who are cash-strapped tend to turn away from fresh foods,” says retail analyst Kevin Coupe, editor of MorningNewsBeat. “They will tend to buy more packaged goods.”

Coupe says Walmart’s recent push to offer more fruits and vegetables at its stores was ill-timed.

And then there are some surprises in the Walmart cart.

“You wouldn’t think Snapper mowers and Webber grills would be doing well, but they are,” says Yarbrough.

“They might say, ‘OK, I want this new piece of luxury” and then they might hang back on buying middle tier clothing,” says Christopher.

The other thing about a Walmart cart — it might not be a cart at all.

“It’s much easier to price compare online,” says Deborah Weinswig, managing director at Citigroup. She says when it comes to brick-and-mortar stores, Walmart is still the discount king, but online it’s losing lots of carts to retailers like Amazon.