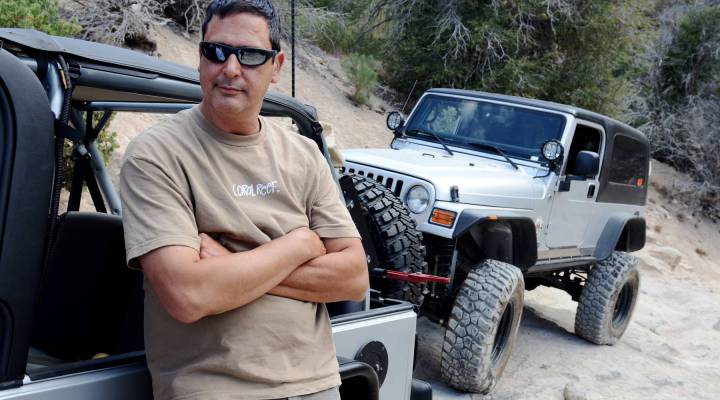 Jeep: A car brand for rich and poor alike

COPY
Al Davidson owns a 2006 Jeep Wrangler Unlimited, which he takes off-roading on weekends. During the week he uses the Jeep to run his kids to sports practices and to get to work. He owns his own print shop in Orange County, California.  Jolie Myers/Marketplace
Income Upshot

Jeep: A car brand for rich and poor alike

Al Davidson owns a 2006 Jeep Wrangler Unlimited, which he takes off-roading on weekends. During the week he uses the Jeep to run his kids to sports practices and to get to work. He owns his own print shop in Orange County, California.  Jolie Myers/Marketplace
Listen Now

We make a lot of assumptions about people based on the cars they drive. A driver in a new Mercedes-Benz has money. The person behind the wheel of a new Ford Fiesta may be middle or working class. But there’s one auto brand that has managed to attract people across the wealth divide. Car data shows that in new auto sales, Jeep does equally well among people who are making less than ten-thousand dollars a year and those who make over half a million.

The Orange County Dirt Devils, an off-roading group that volunteers on weekends to help clean up trails in the San Bernardino National Forest, seems to exemplify the data. Castulo Olivas, a member of the group who works in air conditioning, says that aside from the fact that they all drive Jeeps, he doesn’t have a lot in common with many of the people in the group.

“I know one guy is a pipeline inspector,” Olivas said. “Another guy works in a computer department, does IT. One person does medical sales. You know — heart valves and stuff. They have professions that require college and people that just work in a gas station. It doesn’t matter.”

If you look at car data based on income, it is stark. There are cars that rich people buy, cars that the middle class buys, and cars that poor people buy. But everyone buys Jeep. Jesse Toprak, an analyst for TrueCar.com says Jeep doesn’t have a lot of models, but it has them at both ends of the price spectrum — from $50,000 to less than $20,000. “You can literally lease some of these vehicles for under $300 a month,” Toprak said. “In many cases, if you live in a big city, your mass transit costs might be more than that.”

Toprak says maybe more than any other brand, Jeep capitalizes on it’s “cool” image. “It does give you that — hey, I’m not a mom driving a minivan,” Toprak said.  Analysts say most Jeep owners never take their Jeeps off-road. But the point is — they could if they wanted to.