Politicians spend a lot of time talking about cutting down on government waste. But what if you could apply the same techniques to government spending that investment advisors use to pick stocks? A new Pew-MacArthur report looks at how states are using cost-benefit analysis to make smarter public policy.

In Iowa, the state corrections system took an inventory of the cost-effectiveness of programs ranging such as job training, GED completion and drug treatment. Most turned out to be a good deal for taxpayers in the long run: participants were less prone to re-offend and more likely to become productive.

But there was one big exception.

“We found out that our programs for domestic abusers, which is a tremendous concern in society — they don’t work,” says Lettie Prell, the director of research for the Iowa Department of Corrections.

Prell says programs for men sentenced to probation and a batterer’s education course turned out not to do much good. In some cases, participants were more actually more likely to abuse again.

“Not only are we not addressing domestic violence,” Prell says. “But we’re not being responsible stewards of the money we’re given to run this.”

“Studies have identified sets of programs which the research is very clear are good investments for taxpayers,” he says.

What can states do when they’ve made a bad investment? Move the money somewhere else.

Iowa corrections officials are developing a new treatment program for domestic abusers with help from Erika Lawrence, a psychology professor at the University of Iowa. She says the old approach focused on trying to change negative thoughts. In the new program, offenders are taught to acknowledge those thoughts, but behave differently.

“Believe it or not, that is working,” Lawrence says.

Early results in a study of more than 800 men appear to cut rates for repeat offenders in half — compared to 5 percent or less for the old way.

If that holds true in the long-term, it will save the state plenty in court costs and incarceration … not to mention the impact on victims — something harder to put a price on. 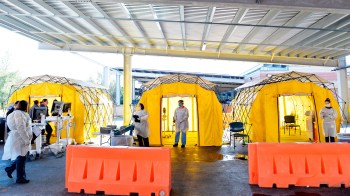