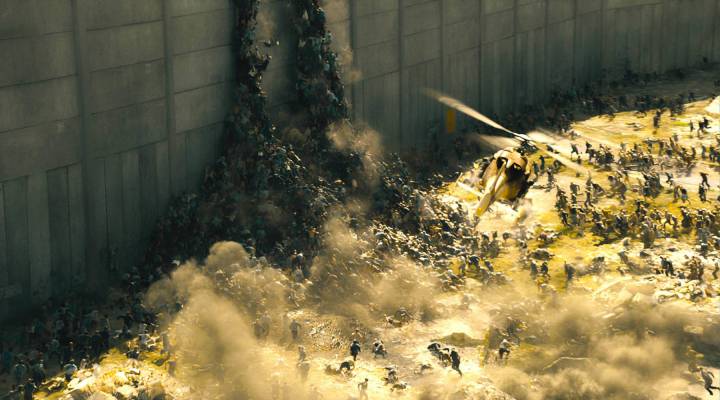 What’s behind the future of hit movies? An algorithm

What’s behind the future of hit movies? An algorithm

Summertime is money time for Hollywood. And this season has featured a glut of big-budget films: Some blockbusters, like Man of Steel and World War Z; several simply…busts. Think Lone Ranger. Some entrepreneurs are trying to remove financial risk by bringing science to the art of filmmaking.

The thrill you feel when Brad Pitt faces off with killer zombies in World War Z and the way your heart jumps when Daisy and Gatsby are reunited can be measured and priced. Big movie studios have started using big data to predict a film’s success.

“We use a computer enhanced algorithm that has the data of many, many, many movies, which have been analyzed by my colleagues and broken down,” says Nick Meaney, CEO and co-founder of Epagogix, a consulting firm that works with the entertainment industry.

EpagogiX analysts read a script and place a value on all of the plot points, everything from love scenes to car chases to quirky sidekicks. “And they score them according to a directory, in the way a teacher might score a test,” says Meaney.

Those scores are fed into the computer algorithm, which then calculates how much the movie will make at the box office, plus or minus about 10 percent. Epagogix will also recommend script changes to make a movie more marketable and profitable, like setting it in a different place. Or scaling back a character’s role, a recommendation that thrilled one studio executive.

“One of the heads of the studio laughed and said, ‘Oh that’s great! You’ve just saved me $12 million!'” says Meaney, recounting the conversation.  “And we said, ‘How so?’ And he said, ‘The person I had in mind for the female lead was Ms. X,’ a very well known Hollywood actress, ‘and you’re saying that role doesn’t need to be as big as it was, so we don’t need her.'”

The profit impact will be known only after the film is released. Confidentiality agreements bar disclosure of specific films and studios working with Epagogix. But Richard Furlin, a movie financier with MovieArb, says he’ll back a film only if it’s been vetted by Epagogix.

“As one studio said, they’re shockingly accurate,” Furlin notes. “It can have a dramatic effect on your portfolio.”

Furlin believes recommendations from Epagogix have boosted revenues of some movies he’s financed by more than one-third. But there’s resistance in Hollywood to using big data.

“There’s still a lot of battle over the artist side versus the financier side,” he says.

Tinseltown is coming around, says Vincent Bruzzese, head of Worldwide Motion Picture Group, a data consultancy that has analyzed movies like District 9 and Oz the Great and Powerful.

“To me data is a very cold word,” says Bruzzese, a former statistics professor. “Our job is to look at what the audience is saying and use that information in an actionable way.”

Bruzzese combines data he’s collected with thousands of viewer surveys he conducts. He says studios, producers and even writers are coming to him more and more. Some pay tens of thousands of dollars per script.

Some of the things Bruzzese has uncovered: In films that are based on a true story, sticking to the facts is a must because more than half of the audience will Google that story when they leave the theater.

“If it turns out the ending of the movie was sugar-coated, that actually bothers people,” he says “It affects their ability to spread positive word of mouth. They feel cheated.”

Also, if you want the scariest possible slasher film, make the killings random, rather than motivated by something rational, like revenge or money, Bruzzese says.

Of course, the rules are never hard and fast, says Epagogix’s Meaney. All of the elements interact with each other in a unique way in each film, which is what makes this stuff so tricky. Even big explosions, the Hollywood blockbuster staple, aren’t always a plus.

“In a film which requires explosions, they add points,” laughs Meaney. “If it makes a movie fall between genres, which is almost a cardinal sin, it actually might be a demerit.”

Entertainment analyst Porter Bibb says the movie industry should be wary of screenwriting by numbers.

“If you put everything into the meat grinder of big data, you come out with a hugely similar product,” says Bibb. “That is taking away a tremendous amount of creativity and it may, in the end, come back to bite the studios.”

The again, the studios have had some notable flops this summer and box office take is down from last year.