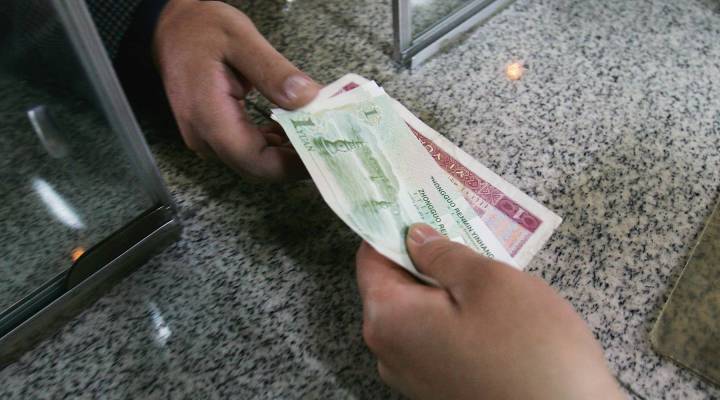 You need to care about China’s credit crunch: Here’s why

A man buys subway tickets with Chinese yuan banknotes in Beijing, China. This week, Japan and China will begin to trade currencies without going through the U.S. dollar. Cancan Chu/Getty Images
Marketplace Whiteboard®

You need to care about China’s credit crunch: Here’s why

A man buys subway tickets with Chinese yuan banknotes in Beijing, China. This week, Japan and China will begin to trade currencies without going through the U.S. dollar. Cancan Chu/Getty Images

Just imagine if Apple or Microsoft borrowed a chunk of money very cheaply from Bank of America. But then, instead of using that money to build more iPhones, what if Apple then took that money, turned around and lent it out to, say, Facebook, at several times the rate of interest. Already sounds like a bit of pyramid scheme. But then, imagine Facebook turns around and lends the same money to Twitter at an even higher rate.

Companies are borrowing cheaply from state banks and lending the same money to other companies and then those companies are lending it out again. It’s called shadow banking because it is completely unregulated and happens in the shadows of the system, out of sight of all but the participants.

(You can see a video explaining US-style shadow banking, which is a bit different, here).

This informal lending has been cranking up debt levels in China, forcing up prices on all sorts of assets and raising the spector of the same kind of debt-related crisis that nearly crushed the US in 2008. In response, the Chinese government is clamping down on this and other unregulated lending activities.

Unfortunately, a lot of the growth in China has come from the shadow banks. Stopping this kind of lending risks a credit crisis. We all remember the U.S. credit crunch when we all learned too much about LIBOR and credit spreads: When companies can’t get credit, they stop borrowing. In that world, companies become dependent on cash, and if they haven’t got enough cash coming into the door to fuel growth, they stop growing. They buy less, they lay people off. It sounds all too familiar and investors are worried it’s happening again in China.

But then, why should we worry about tight credit in China?

Well, we all know what happens when borrowing costs go up, right? Say it in unison, now: The company passes those costs on to the consumer. And in China’s case, the consumer is us. So the cost of all that stuff we get from China will go up. Plus, because the Chinese will have less money, they won’t be able to buy stuff from us, so we won’t be able to sell as much to China.

And then there’s the fact that over the last decade, China has been perhaps the biggest engine of growth, not just in Asia, but across the world. As China slows, so will a great many other countries that rely on trade with China to fuel their own growth.