The Colorado River supplies water for 40 million people and 4 million acres of farmland. But scientists warn that with record drought and a growing population, there’s a lot more demand than the river can supply.

2013 is on pace to be the driest year in a century along the Colorado River. And the two huge lakes that serve as its reservoirs are expected to drop below half full for the first time since 1968.

The seven states that rely on the Colorado River are trying to turn that around, by teaming up with the federal government, tribal leaders, farmers and environmentalists.

“We really are seeing a different kind of hydrological period, and it’s not going in the right direction,” says Anne Castle, an assistant secretary with the U.S. Department of the Interior. Castle says groups of stakeholders will work to prevent their main source of water — and income — from drying up within the next 50 years.

“We really feel that we can meet the water needs of the Southwest, while protecting a healthy flowing river and all the jobs that depend on it,” says Molly Mugglestone, co-director of Protect the Flows.

The other challenge for all sides, could be figuring out how to get along through the process. 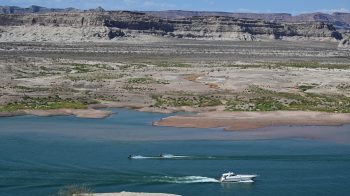