After being removed, does storm debris have value?

After being removed, does storm debris have value?

RE-CO BKLYN, the only sawmill in New York City, is turning fallen trees into furniture. Not just any fallen trees, co-owner Dan Richfield explains on a tour of the mill, which is in an industrial block of East Williamsburg, Brooklyn.

“I guess this is about a 15-foot-tall pile of logs from Hurricane Sandy,” he says pointing to a heap of Oaks, Maples and other varieties his company acquired from a Long Island landfill.

“When we go out sourcing to a landfill, we’re looking at a pile of logs — especially after a hurricane like Sandy — that’s, you know, like 20 city blocks long and like 50-feet tall,” Richfield says.

Wooded Long Island had a particularly large amount of downed trees, but it was not alone. New Jersey removed enough trees downed by Sandy to fill 600 Olympic swimming pools, says Larry Ragonese, press director for the state’s Department of Environmental Protection. Trees and shrubs accounted for about one-quarter of all storm debris that was cleared.

“There’s so much tree material, that some of those temporary sites still sit there with piles of vegetative debris,” he says.

In the immediate aftermath of a disaster, health and safety concerns often mean that removing debris is more important than trying to salvage it.

“You have got to get the debris out as fast as possible,” Ragonese says.

But there are instances of reuse — appliances, scrap metal and plastic bottles were sent to recycling centers. The New York City parks department is reusing damaged boardwalks.

But far more vegetative waste was turned into mulch — at a cost to the state — than put to more direct use.

“This could be a really great bench,” says Miller. “Yeah, or a shelf.”

A typical tree can yield as many as eight slabs, and a slab of Red Oak — the most common tree here — can sell for between $200 and $800, depending on its size and character. The 200 Sandy trees RE-CO BKLYN collected at just the cost of transportation could keep the business running for two years.

“Despite all the devastation, these kinds of storms are jackpots for people like us,” says Richfield.

He saw the devastation up close, and was upset. But he sees a silver lining in the fact that at least these trees won’t end up as just debris in a landfill, and could have a second life that will serve its new owners for years to come.

“If anything,” Richfield says, “this is some good being put to something bad that happened.”

The first wood from Hurricane Sandy will be ready for sale in the coming weeks.

RE-CO BKLYN lets buyers see each tree’s story, check out a few below.

This Silver Maple fell down in a backyard in Crown Heights, Brooklyn during Hurricane Irene in 2011. Slabs from the tree were air-dried for a year, now they retail for $350.

These Red Oaks were recovered from Glen Cove, Long Island after Hurricane Sandy. Some of the trees were up to 30 feet tall.

This Cherry tree came down in a few blocks from the ocean in Massapequa, New York during Hurricane Sandy. The tree was leaning on a house which had been completely flooded by the storm.

This 80-year-old Red Oak fell down in North Hempstead, Long Island during Hurricane Sandy. RE-CO BKLYN recovered it from the town’s landfill before it made its way to the chipper. 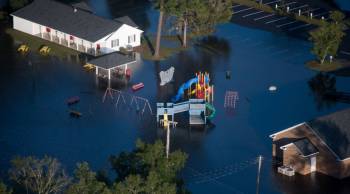