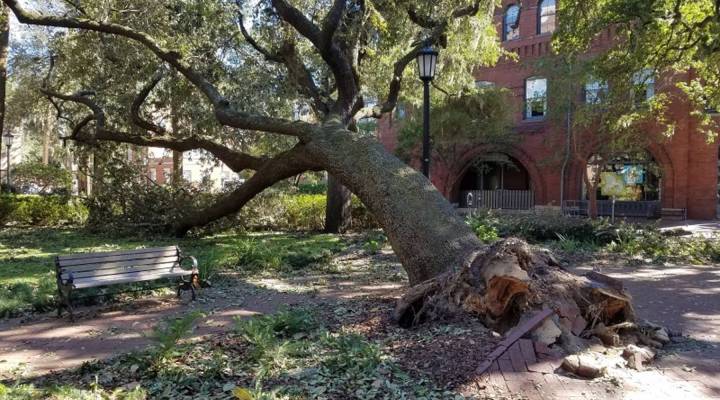 COPY
Hurricane Matthew uprooted or damaged many trees in Coastal Georgia, including some in Savannah's famous historic squares. Emily Jones

Savannah, Georgia is known for the large trees that line its historic streets, draped in Spanish moss.  In early October, Hurricane Matthew took down many of those trees. As cleanup efforts continue, some locals are trying to save the trees from the wood chipper.

At a large open lot in Savannah, trucks full of branches and logs line up, waiting to be counted. Once it’s checked in, the debris gets unloaded onto a growing pile.

Then, Dow Knight explained, “that material gets put through the grinder and we process it into mulch, and we stockpile the mulch.”

Excavators move debris from Hurricane Matthew toward its eventual destination: the grinder, which will turn it into mulch.

Knight works for Ashbritt, a company that does cleanup all over the country. He’s managed the operation here. His company had gathered more than a million cubic yards of storm debris in early December – including many large, old trees, some dating back a century or more.

That got Brandy Mai, a longtime resident of the Savannah area, thinking that at least some of the trees shouldn’t become mulch.

So, she started a Facebook group after the storm, and quickly found she wasn’t alone. Posts poured in from others hoping to do something with their downed trees. The group helped residents find local sawmills and woodworkers like Charley Ward.

For Ward and his wife, Sarah, their mill is a fledgling business – what she described as their “startup,” Slowvannah Farms. They’re hoping to sell a lot of this wood as lumber, for $3-4 per foot. That’s comparable to a home improvement store, because they got most of the trees for free in exchange for hauling them away. They estimate they’ll get about 10,000 feet of lumber from the Hurricane Matthew trees.

So far they’ve had a fair amount of interest – and not just because the wood costs about the same as commercial lumber, but also because of what buyers can make with it. “It’s something special, something you don’t just buy at Ikea or Walmart,” Charley Ward said. “And you kind of have a memory of it.”

Charley Ward and Bart Haigh cut a log into boards. After the wood dries for six months to a year, they can sell it as lumber or make furniture.

Bart Haigh is a carpenter who’s helping mill the wood. Brushing off a freshly-cut piece of hickory, he said, “You can see right now why that’s such nice furniture wood. That nice dark brown in the middle with the contrast with the white – just absolutely beautiful.”

He’ll use slabs like the one they just cut for furniture – tabletops and legs, benches, counter tops. One of those benches can sell for $500, while custom tables run about $3,000. A large tree can produce about ten tables.

But it will be awhile before they see that kind of money. All this wood has to dry for six months to a year before it’s ready to use.

In the meantime, local businesses have gotten some storm souvenirs ready for gifts. Haigh was selling coasters and cheeseboards for $30 apiece. He said they were pretty popular.

“Oh, gosh, yes. A lot more  than I had ever expected,” he said. “My wife suggested doing this and then all of a sudden I find myself making hundreds of sets of these.”

Coasters aren’t his favorite project, but business is business. And Haigh said making something out of the downed trees is important.  He has a long list of people waiting to get some piece of the trees that fell in their yards.

“You’ve gotta do what you’ve gotta do,” he said. “The trees are down now. I’m sad they’re down, but we’ve got to utilize them or it’s even sadder.”