FedEx ups its service to go after UPS

FedEx ups its service to go after UPS

Every year, consumers buy more stuff online, and that means big business for the companies that ship all those packages.

One of the world’s largest carriers, FedEx, is launching a new service that lets people customize when and where they get their deliveries.

It’s not exactly an original idea… FedEx’s biggest rival, UPS, rolled out its “My Choice” service more than a year and a half ago, and it’s approaching three million users. Customers can pay a $5 fee to reroute packages, or $40 a year for premium perks like a two-hour delivery window. Now FedEx is launching a similar service called Delivery Manager.

The companies charge similar fees for the same options. But, spokeswoman Carla Boyd says, there’s no subscription cost for the Fedex service.

“We do not lock users of service into premium price membership to access the options they want,” she explains. Boyd says FedEx is responding to market research on the growth of online sales, which increased 28 percent last year over the year before, according to the National Retail Federation.

The big parcel carriers are looking for ways to respond.

“It’s amazing that FedEx is such a marketing-oriented company, that they would have came up with a very boring and technical name for a service that’s meant for a consumer, not a transportation manager,” he says.

Jindel says both companies face the same challenge: as more retailers offer free shipping, consumers might not want to pay for shipping perks. 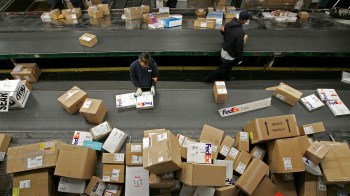