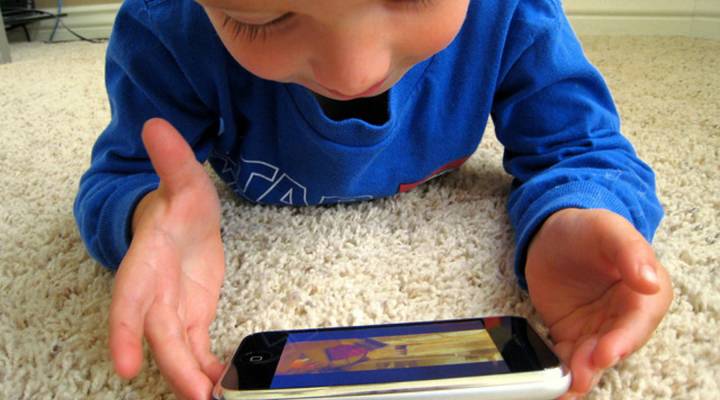 COPY
A kid plays with an iPhone. flickr.com/Paul Mayne

A kid plays with an iPhone. flickr.com/Paul Mayne
Listen Now

A couple of years ago, Brent Goldberg’s two young sons downloaded “Dolphin Play,” a free game onto their iPod Touch. In the game, you raise dolphins and other fish in a tank. There are also spending opportunities. You would get coins and exchange them for virtual fish. In the case of Goldberg’s seven-year-old son, $50 worth of virtual fish.

“I found out two hours later when the credit card company called and said I had some weird charges coming through,” he says. “I’m like, ‘Oh, where’s it from?’ They’re like, ‘Oh, it’s from Apple.’ I’m like, ‘Boys, what are you doing?'”

That cry has echoed through homes across the country — roughly 23 million homes. That’s how many families Apple will compensate under the terms of a proposed legal settlement. Two years ago, peeved moms and dads filed a class-action lawsuit, alleging that Apple didn’t have proper parental controls on free mobile-device games. That allowed children to rack up big iTunes charges on so-called “in-app purchases.” Depending on the game, these purchases could give players a bigger sword, better house or bonus points.

Parents like Mike Bertrand got stuck with stuck paying for his children’s iTunes spree.

“The kids were very surprised to learn that they were spending real money and really confused about it,” he says.

“It’s a little virtual aquarium, but if you want to buy different tanks or you want to buy little castles or little fish for your virtual fish tank or different species of fish, you have to use what appears to be play money,” he says.

It’s not play money. Bertrand realized what was going on when he noticed an email receipt from the iTunes store for $150.

“I started going through some other ones that were trapped in my spam folder and found that over the course of about a week, my kids tallied about $1,500 on the game,” he says.

Apple reimbursed both Betrand and Goldberg. The two fathers didn’t join the class-action suit. In agreeing to settle that case, Apple will give many parents a $5 iTunes gift card. Those parents whose kids’ fishy charges topped $30 will get cash refunds. The settlement adds up to at least $100 million.

The question is whether the supposedly free games represent a deceptive business practice, says Colby Zintl with the advocacy group Common Sense Media. She applauds the settlement and points out Apple has added some barriers to stop unauthorized iTunes purchases. There’s now a setting on iPhones, iPads and other devices that requires a password before any real money can be spent in a game or app. Still, Zintl takes issue with some free games aimed at children.

“The ability to press a button and move to a next level and you’re charging your parents’s credit card, you have to question what the business practices are,” she says.

“When the app store originally launched in 2008, there were apps like ‘Super Monkey Ball’ and they were $10,” he says. adding that no one wanted to pay that much.

“Freemium” means the game itself is free, but things inside the game costs money.

“Instead of having to earn something in a game, you just buy it,” Ritchie says.

Betting on impatience paid off. Ritchie says all of the top-grossing games right now are free…ish.

Mike Bertrand has found a way to keep his children’s games genuinely free.  “My kids don’t know my iTunes password anymore,” he laughs.