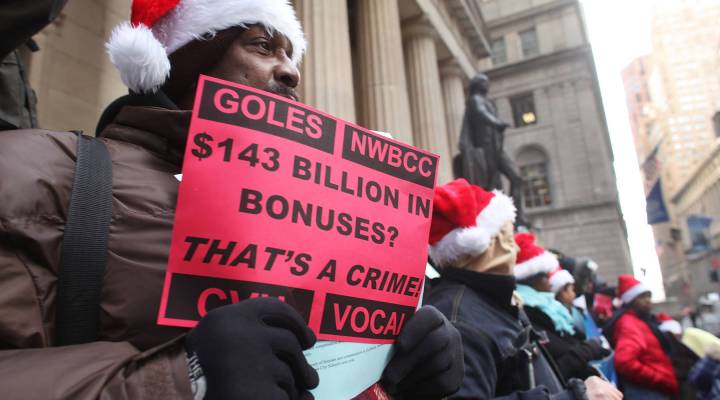 Activists, including the unemployed and those living in foreclosed homes, demonstrated outside of the New York Stock exchange against Wall Street bonuses on December 15, 2010 in New York City. Spencer Platt/Getty Images

Activists, including the unemployed and those living in foreclosed homes, demonstrated outside of the New York Stock exchange against Wall Street bonuses on December 15, 2010 in New York City. Spencer Platt/Getty Images

Wall Street financiers cut bigger bonus checks for themselves in 2012 than in the previous year. But bonus payments were well below their record high just before the financial crisis.

New York banks and investment firms paid an estimated $20 billion in cash bonues last year, according to the New York State Comptroller. The average bonus was $121,890.

“As we all know and acknowledge, the securities industry in New York City is a major driver of the city and state economy,” said New York Comptroller Thomas DiNapoli. “It’s no secret that if Wall Street is strong all New Yorkers benefit.”

The bonus figures coincided with news that bank profits surged last year. The Federal Deposit Insurance Corporation said financial institutions that it insures earned $141 billion, up 19 percent over 2011. Still with a shaky outlook for economic growth, several Wall Street banks have downsized in the past year and announced more job cuts to come.

“They’re good jobs if you have them and certainly very significant salaries,” he said.