Food stamps and the politics of poverty

Food stamps and the politics of poverty

Andrea Waterstreet is 44, single and doesn’t have children. She grew up in middle class suburbia and worked for 25 years, mostly as a waitress. But when she was diagnosed with a chronic illness and became too sick to work, she quit her job. That was in 2008.

“I’ve been working since I was 14 or 15,” says Waterstreet. “And this is something I never thought would happen.” She covered her bills using unemployment benefits until they ran out in 2009. Waterstreet says she lives simply in a rent-controlled apartment in San Francisco with roommates, doesn’t have a car and has a pay-as-you-go cell phone. “It’s been a couple of years of living off nothing at all,” she says. Nothing but a few hundred dollars from her parents for rent.

And food stamps, though she doesn’t use that term.

“I just call it EBT,” says Waterstreet. EBT stands for Electronic Benefit Transfer, and without the program, Waterstreet says she would “be struggling with the homeless shelters that serve food, church pantries that give you boxes of food. That means a lot of traipsing around the city and if you’re disabled, like me, and not feeling good, I don’t know how you’d do it.”

Andrea Waterstreet is one of the nearly 47 million Americans taking part in the federal government’s Supplemental Nutrition Assistance Program, or SNAP. Since the primaries, food stamps have been highlighted by Republicans vying for the White House as an example of America’s growing dependence on government programs to meet their basic needs.

In the primary campaign, former House Speaker Newt Gingrich called President Obama: “The most effective food stamp president in American history,” saying his campaign would use the symbol of food stamps vs. paychecks to signify the direction he would take the country. Though Gingrich lost in the primary to former Massachusetts Gov. Mitt Romney, the issue remains a popular line of attack. Romney’s running mate Paul Ryan said in a recent speech on poverty that state and government spending on programs for low-income Americans, like food stamps, added up to $1 trillion last year. “We spend all that money attempting to fight poverty with government programs and what do we have to show for it?” Ryan went on to say we have 15 million more people on food stamps than we did four years ago. And in each of the three presidential debates, Romney brought up the number of Americans using the SNAP program. “We’ve gone from 32 million on food stamps to 47 million on food stamps” in Obama’s tenure, he said.

It’s unclear what Romney and Ryan would do with SNAP if they win the election. If Romney were to keep federal spending at 20 percent of gross domestic product as promised, the Center on Budget and Policy Priorities says programs like SNAP would have to be cut.

Obama did not address the issue of food stamps in any of the presidential debates.

“SNAP is doing what it’s supposed to do during an economic downturn,” says Craig Gundersen, an economist and professor at the University of Illinois who has researched the effectiveness of the program. “More people are receiving SNAP because more and more people are out of work and poor.” Gundersen says the average SNAP participant uses the program for eight months, and he suggests that when the economy starts to pick up, fewer Americans will need SNAP and less government money will go to pay for it.

“Why are we trying to cut back on programs that benefit the poor as a total amount of money in our society? It’s a tiny amount,” says Gundersen. He adds that food stamps are such an integral and successful part of the social safety net that he doesn’t really believe Democrats or Republicans can do much to change it.

So why all this talk about food stamps? Perhaps it’s because they’re a symbol of government help that needs little explanation. But Paul Roderick Gregory, an economist and fellow at the conservative Hoover Institution, says the stigma associated with food stamp usage is gone and that’s not good.

“One of the things that I’ve noted, that I think is new, is the active recruitment of individuals to go on food stamps, there’s a lot of advertising,” Gregory says. “If you go on the internet you’ll find a lot of encouragement to sign up for SNAP, and I find that troubling.”

He says it’s troubling because it discourages Americans from giving to local churches and charities and encourages those in need to look to the government for help first. “There’s an automatic assumption that the government will take care of this,” says Gregory. And he says with that attitude comes a country with, “less output, less prosperity, less growth, and more government debt. Nothing good comes of this,” he adds.

Democratic Congressman Luis Gutierrez says the people in his predominantly Latino, working-class district in Chicago need social welfare programs, because they were especially hard hit during the Great Recession. He says all the food stamp talk during this election cycle amounts to class warfare.

“Well what do you think when people keep repeating and repeating ad nauseum, for no good reason, that so many people are on food stamps,” says Gutierrez. “It’s about hunger, it’s about government attempting to combat hunger in America. And I think that’s a laudable goal for the richest and most powerful nation in the world.”

He adds that the debate over the U.S. government’s role in helping the poor during a fiscal crisis is just getting started. He says it’s something that Congress will be battling over as soon as the election is over.

And that debate is happening outside the Beltway, too.

In the parking lot of the Los Angeles Regional Food Bank, Scott Wilderman packs up his vehicle with food for his church pantry. Wilderman says he comes every week to the food bank to stock up. “More people out of work, more food given out, more people on food stamps,” says Wilderman. “At our church, they have a lady that sits in there and signs people up for food stamps. So now they’re like promoting food stamps to people,” he says. Wilderman adds that it’s the job of churches and charities to help the poor, not the government — especially when the government can’t afford it.

But Andrea Waterstreet, the disabled food stamp recipient, says she’s been in line at a food pantry and the entire ordeal was beyond depressing. And the food was processed and unhealthy. “When I get to use my EBT card,” says Waterstreet, “I get to feel like a normal person. I don’t feel like, ‘hey you’re poor and everybody else knows it.’ “

Waterstreet says there’s nothing wrong with the government providing for people in need. She says poor people should be able to live with dignity, and food stamps help with that. 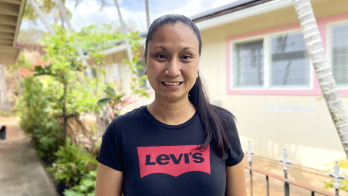