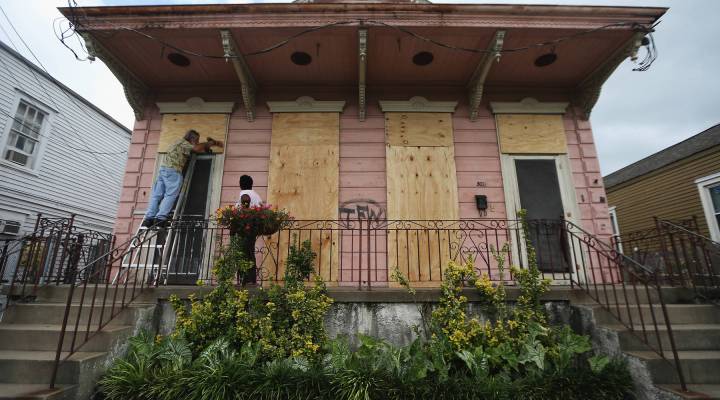 COPY
Claudia and Richard Launey board up their home before Hurricane Isaac, which still bears a marking from Hurricane Katrina, on Aug. 28, 2012 in New Orleans, La. Mario Tama/Getty Images
Money Matters

Claudia and Richard Launey board up their home before Hurricane Isaac, which still bears a marking from Hurricane Katrina, on Aug. 28, 2012 in New Orleans, La. Mario Tama/Getty Images
Listen Now

Louisiana officials say 13,000 homes were damaged in Hurricane Isaac. And now those unlucky homeowners will have to deal with their insurance companies — if they have insurance.

Many insurers have pulled out of the Gulf states and others have raised rates on insurance policies. One Alabama insurance company just announced it wouldn’t renew 73,000 home policies, and another 50,000 policies were canceled ahead of the most recent storm along the coast. “That means as much as 20 percent of homes in Alabama don’t have wind coverage at all,” says Paddy Hirsch, Marketplace’s senior producer of personal finance, in this latest installment of Money Matters.

He says insurers are arguing that premiums aren’t keeping up with expenses, even for common problems in those areas like sinkholes. “Insurers argue that they’ve also been too generous with these discounts that they give for strengthening homes against hurricanes, and that’s forcing premiums up as well.”

So what do you do to protect yourself from rising premiums? Hirsch says: Fix your house. “These discounts that I mentioned for storm strengthening can be considerable, so find out what the insurance company wants to do, and then do it. And do it absolutely right — you’ve got to get your home up to code — because if you don’t, the insurance companies will come around and inspect you, and if they don’t like what they see, they’ll revoke the discount.”

In case of a dispute with your insurance company, Hirsch says it may be worth writing to your state representative, or asking your state department of insurance what companies are operating in your area so you can shop around for the best deal.