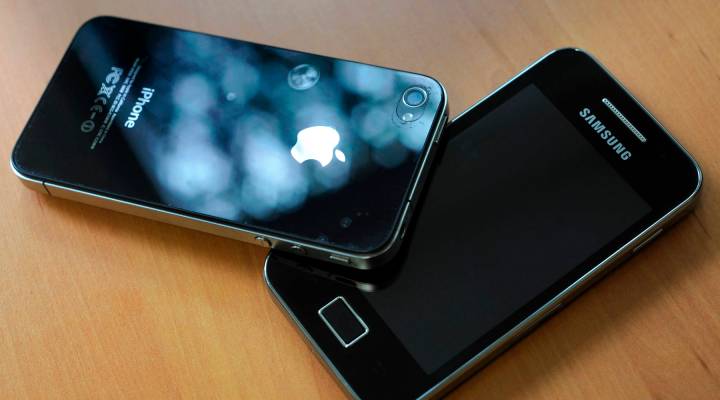 COPY
An Apple iPhone 4 and a Samsung phone. A California jury has reached a decision in the nearly month-long trial between the two tech giants over patent infringement. DAMIEN MEYER/AFP/Getty Images

An Apple iPhone 4 and a Samsung phone. A California jury has reached a decision in the nearly month-long trial between the two tech giants over patent infringement. DAMIEN MEYER/AFP/Getty Images
Listen Now

And the victory goes to Apple. The jury in the Apple versus Samsung tech battle royale handed down its verdict this afternoon. The country’s largest company won, hands down. The jury found Samsung infringed on six Apple patents in the design of its mobile devices, and awarded Apple more than a billion dollars in damages.

Mike Isaac, senior editor for All Things Digital, says Samsung was found in willful violation of a number of Apple’s patents, “which is essentially much worse for Samsung, because it can actually up the damages count. Apple didn’t receive the full $2.5 billion in damages it was seeking, but it was still pretty much a slam dunk across most of the board on the patents they violated.”

The jury also rejected Samsung’s counterclaim against Apple. “They completely lost out on their case and were awarded zero dollars in damages,” says Isaac.

Isaac says this verdict wasn’t necessarily an easy win from the start. “But as the trial progressed, Apple presented a pretty strong case throughout. And a few memos surfaced from Samsung that were pretty damning, in light of the whole trial — one of which basically saying that Apple is killing everyone in smartphone and tablet design.”

What might this mean for Apple, already the biggest company in the world? Continued dominance, says Isaac.

“[This is] Apple saying essentially, ‘Don’t copy us, because we will go after you,'” he says. “If Samsung — which is the most successful Android-based hardware competitor — is getting smacked down by Apple, it’s not a good sign.”

And what does this mean for Samsung? Isaac says this verdict will serve more as a warning sign to other companies. “Future designs by Samsung and by HTC or other rivals may look a heck of a lot different compared to what they looked like in the past, just so they won’t look like they’re stepping on Apple’s toes,” he says.