Kai Ryssdal: I’ll start the set up of this next story by noting that Elvis died 35 years ago tomorrow. And that there are people out there, in the absence of proof to the contrary, who believe he’s still with us.

With that as a pivot point, we turn now to Priceline and William Shatner. Shatner played the “Priceline Negotiator” in television ads for years. Until they killed him off in a fiery bus crash in an ad back in January.

Or so we thought. Now, conveniently just as Priceline is hitting a rough patch, Shatner’s back in a new ad airing this week.

Mark Garrison: So he survived a bus crash and took up surfing? The new ad set on a beach doesn’t offer much explanation of how The Negotiator escaped death. Priceline’s Brian Ek says the company always kept the door open for a Shatner comeback.

Brian Ek: When he went off the cliff in the bus, you actually didn’t see him, so there was just that little bit of doubt and it was intentional.

At the time, Priceline was focused less on customers naming their price and more on getting them to book hotels and flights at fixed rates, just like Orbitz and Expedia. So Priceline emphasized that by ending Shatner’s Negotiator character. Michigan State advertising professor Saleem Alhabash was surprised. It’s unusual for companies to toss away a valuable frontman.

Saleem Alhabash: We want to listen to stories and if ads can really create a character, then I’m definitely going to remember the brand and have a positive response toward that ad and the brand as well.

Whether it’s Travelocity’s gnome, Geico’s gecko or Flo, who hawks insurance for Progressive, strong characters can make something as boring as a travel website or insurance company sound interesting. Gary Wilcox is an advertising professor at the University of Texas at Austin.

Gary Wilcox: All those things are endearing and bring a personality to the brand that normally they wouldn’t have.

So it’s no surprise that Shatner’s character is cheating death soap opera-style. 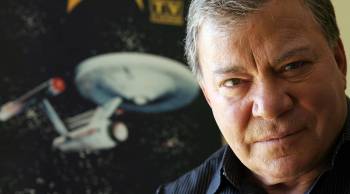