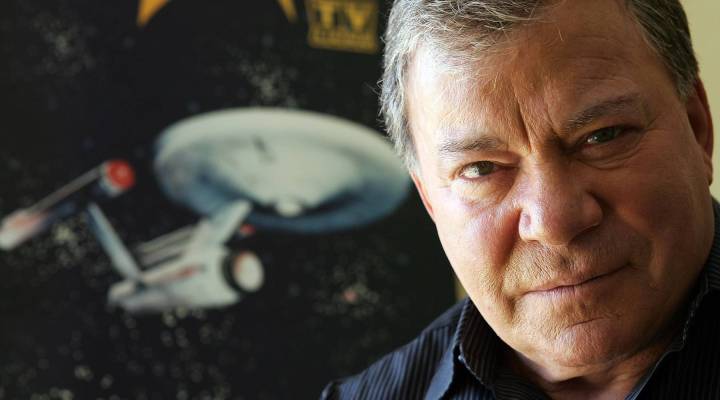 COPY
William Shatner is currently promoting three projects: “Why Not Me?” a country music album; “Shatner Claus,” a Christmas album; and a book, “Live Long and ... : What I Learned Along the Way.” Frazer Harrison/Getty Images

William Shatner is currently promoting three projects: “Why Not Me?” a country music album; “Shatner Claus,” a Christmas album; and a book, “Live Long and ... : What I Learned Along the Way.” Frazer Harrison/Getty Images
Listen Now

In a changeup from all of the economists we hear from, how about some business advice from a starship captain? For Monday, we took a few moments to chat with actor, author, singer and pitchman William Shatner. Every generation knows a version of “Star Trek,” but Shatner’s portrayal of Captain James Tiberius Kirk of the USS Enterprise still rings true for many people as the captain from the first incarnation of the TV series. Shatner is 87 years old now, but is still boldly going at it on a variety of projects. He talked to David Brancaccio on Marketplace Morning Report.

David Brancaccio: Now I see you, sir, as an artist, but at some level I think you also may be an entrepreneur, with all these projects that you’re juggling at once.

Shatner: Well, I think you can be an artistic entrepreneur — true creativity and then seeing it through to exposition. You know, that goes in my case for films and documentaries and comic books and electric bikes, Pedego electric bikes and virtual reality, Ziva. And then my albums, which I’m marketing right now.

Brancaccio: “Why Not Me?” and “Shatner Claus,” which is the Christmas album.

Shatner: The magic of “dot-dot-dot.”

Brancaccio: You know the way you complete the phrase, though,  is “… prosper.”

Shatner: Well, that’s the phrase used in “Star Trek.” But it’s up to you to live long and … then, you know, say “yes” to life. Why not say “yes” to some virtual reality company, some solar electric company, something that is futuristic that’s going to happen? Why not find something futuristic? Some company that’s cleaning up the environment? Our ability to live, our ability to be human beings alive on Earth depends on our cleaning up the Earth. So why not a company that cleans up the Earth?

Brancaccio: That is a socially responsible investment argument. You’re saying, “invest in making the world a better place in some way.”

Shatner: Well, the worst things are happening and are going to continue to happen until they don’t happen. And so why not invest in the future of making mankind more palatable on Earth?

Brancaccio: Now I assume you’re acting talent is God-given. But where did you get your business skills? I mean, do you come from entrepreneurial stock?

Shatner: No, my dad had a small business in that he manufactured clothes and went to sell it. And I graduated actually from McGill University with what we called up there a bachelor of commerce. I think down here it’s called bachelor of business administration. But I failed all those courses. I did the music courses, I did the acting, I produced, directed everything theatrical at McGill during the years I was there. But I rarely went to class, so I learned at university, but I learned the unconventional way. But being an entrepreneur really means dedicating yourself to the thing that you think is important. The thing that you think is really good. And you may fail. In fact, you have to fail. You have to fail.

Brancaccio: Because being an entrepreneur is taking risks, right? And sometimes it means failure.

Shatner: And if you’re taking a risk, you don’t know what the outcome is going to be, and a great deal has to do with luck. So if you’re not lucky this time, gather yourself up, try again. Sooner or later, if you’re smart, if you’re aware, you will learn by your mistakes and you won’t make those mistakes again. Every actor, every bicycle rider, every athlete has made all the mistakes and only by making the mistakes can you learn what not to do and what to do.

Brancaccio: Have you learned along the way about personal finance from maybe some of your mistakes or some your success?

Shatner: Well, an actor lives by their wits and from job to job. And for me, that meant no or as little debt as possible. So as against all the solid advice of “Yeah, take a home loan, take a car loan, take out a loan,” it was that nut that I didn’t want to have to face every month, in desperation with three children.

Brancaccio: So you kept your debt down?

Shatner: Absolutely kept my debt down. No debt.

Brancaccio: And that allowed you to take some risks with your career?

Shatner: Well, you make some money, that means you don’t have to spend it paying off a debt. You now know what you have and what you can spend.

Brancaccio: Now I get why a creative person wants to keep exploring the unexplored but couldn’t you, financially speaking, have retired on your take from the original “Star Trek” series?

Shatner: No, they didn’t pay us very well, and not only that, it was a couple of years prior to the union getting residuals. So we didn’t get any residuals. So for the billions of dollars that the studios have made off of “Star Trek,” the original cast never received a cent. That didn’t apply to all the other casts, who I presume get these marvelous checks. We don’t. So that’s the way it was. And no, I could not — in fact I was broke. At the end of “Star Trek,” I was divorcing and I had no money. I couldn’t cash a $15 check.

Brancaccio: And so you kept going?