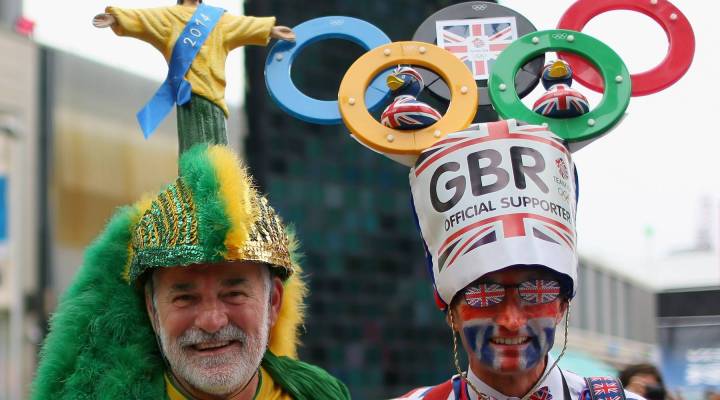 The Commerce Department says Gross Domestic Product grew 1.5 percent in the second quarter. That down from a growth rate of 2 percent in the first part of the year. GDP is a measure of all of the goods and services the economy produces; it’s considered to be one of the most important measures of economic growth.

How’s this for an economic indicator: The September issue of Vogue. It’s pretty much the Super Bowl of publishing — the biggest stage for luxury and high-fashion advertisers. It will have 658 pages of ads alone, way more than last year. The heft of Vogue’s September issue is kind of a bellwether for the health of the fashion and publishing industries.

If you are one of the brave souls traveling this summer you’ve surely noticed that airfares are soaring. And most of the major airlines are reporting healthy profits.

The London Olympics begin today, and the eleven big corporate .sponsors. of the event will begin to bask in the global limelight.  They’ve paid heavily for the privilege — more than a billion dollars between them. In return they expect their association with the Games to be exclusive. Not everyone is happy about that.

This past weekend police in Anaheim, California shot and killed an unarmed man. Violent protests and looting erupted. Anaheim is best known as the home of Disneyland, but there’s a lot more to the city than that.

Computer Hackers invaded Las Vegas this week as part of the Black Hat conference. That’s where hackers get together and talk about the latest in security and security breaches.

The average hourly rate for a babysitter these days is $12.75 per kid. That’s according to data compiled by the website Urban Sitter. New Yorkers shell out the most for their sitters: $15.50 an hour. That’s a lot of money to put the kid in front of the TV and call your boyfriend.

And, beware the casual Friday! A survey from Adecco found that your coworkers are judging you on what you wear. Nearly 60 percent of the people surveyed said shorts weren’t appropriate workwear, and 76 percent said ix-nay on the flip-flops and the ripped jeans. Nearly half said they were offended by the white sock, black shoe combo — which is really sort of a classic.