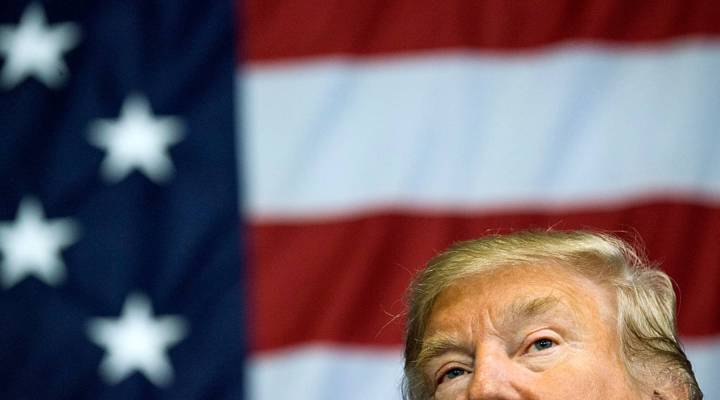 When he wasn’t creating memes or, as the Associated Press put it, “threatening to upend a fundamental pillar of American democracy” at last night’s presidential debate, Donald Trump returned to some old economic hobby horses.

“We are going to start the engine rolling again because right now our country is dying at one percent GDP [growth],” the Republican nominee said. The actual rate is slightly higher — 1.4 in the second quarter and a projected 2 percent in the third. Trump characterized the September jobs report this way:

Last week, as you know, the end of last week, they came out with an anemic jobs report, a terrible jobs report. In fact I said, “Is that the last jobs report before the election because if it is, I should win easily.” It was so bad. The report was so bad. Look, our country is stagnant. We’ve lost our jobs.

The economy added 156,000 jobs in September, slightly below expectations. The unemployment rate rose slightly to 5 percent because about 440,000 more people entered the labor force. David Kelly, chief global strategist at JP Morgan Funds, told us the numbers were “straight down the middle… a very healthy report and a pretty healthy economy.”

Perhaps none of that matters to Trump supporters. About half of his supporters — and a fourth of Americans overall — don’t trust government economic data.

And Trump has promised far greater numbers. He said during the debate he would push GDP growth to over 4 percent.  His economic plan outlines a GDP growth of 3.5 percent per year, adding as many as 25 million jobs over a decade. We looked into it last month, and the plan just doesn’t add up. We just don’t have the people.

“The only way to actually create and fill 25 million jobs would be to have more immigration,” Republican economist and former John McCain adviser Douglas Holtz-Eakin told us. “That doesn’t appear to be in his sweet spot.”

Plus, the conservative Tax Foundation said Trump’s tax plan would cost between $4 trillion and $6.6 trillion over a decade.

Jared Bernstein, former economic adviser for Vice President Joe Biden, told us last month that to give the economy the kind of boost, everyone would have to go out and buy a new car.

“That might get you there. But that means everybody has to buy a car,” he said. “And by the way, it has to be an American car.”

You can hear the rest of the story below, and check out  the other economic highlights from the third and final presidential debate.