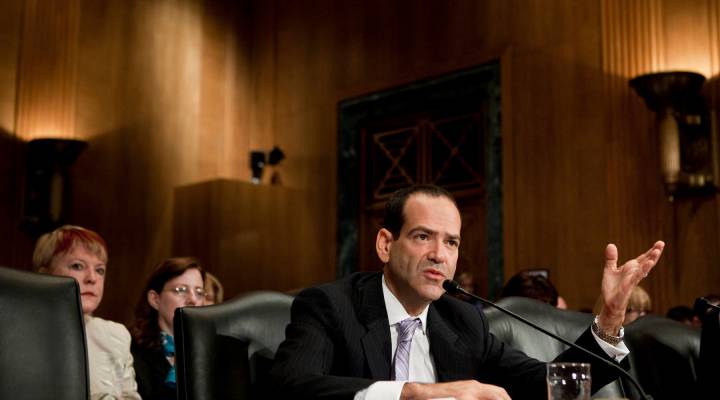 Behind the scenes of the bank bailouts

Behind the scenes of the bank bailouts

Tess Vigeland: It’s been almost four years since Lehman Brothers went under and the world’s financial system started to spin out of control. The fall of 2008 was all about Henry Paulson’s bazooka, the Troubled Asset Relief Program — TARP — a $700 billion bailout for the banks. The bailout legislation created a special inspector general at the Treasury Department to oversee where all that money was going.

Neil Barofsky performed the job until he resigned early in 2011. Now he’s out with a tell-all book of his experiences in Washington, including the time he was pretty sure Treasury Secretary Tim Geithner was about to haul off and punch him. It’s called “Bailout: An Inside Account of How Washington Abandoned Main Street While Rescuing Wall Street.” Neil, welcome to the program.

Neil Barofsky: Thank you for having me.

Vigeland: You know, I have to tell you, reading this four years after the fact, it’s amazing to remember that the original TARP document was all of three pages and it was completely designed to help homeowners by buying up troubled mortgages.

Barofsky: There was a remarkable transformation as the bill made its way through congress, and it’s important to remember that this was part of the legislative bargaining. TARP doesn’t get passed just to help Wall St., the economists insisted that there be foreclosure prevention and homeowner oriented programs as part of TARP, and those promises were, of course, both subsequently abandoned. And part of it was there was never the same type of ferocious commitment to help homeowners, in addressing the housing crisis, as there was was to saving banks.

Vigeland: You talk about TARP essentially just becoming a giveaway. Can you talk about what you mean by that?

Barofsky: Well when the TARP money was exspended, hundreds of billions of dollars were provided to the banks under the Capital Purchase Program. We were told that it was for certain purposes, it was going to help restore lending, and one would assume since those were the goals of the program — that when providing the money in the contracts and the policies — there would be something to advance those goals. But, none of that was present, so essentially the money was given with a very low market interest rate and with no conditions to accomplish those goals, and the banks were pretty much allowed to do anything they wanted with it.

Vigeland: I want you to explain the concept of reputational risk for us — essentially this said that the banks would not commit fraud with TARP money because they would be too concerned about their reputations to do so, right?

Barofsky: Well, over and over again, I heard that arguement, but I didn’t understand. Just that these banks would never, ever take advantage because it would harm their reputations. It was almost as if they didn’t realize there had been years preceeding the crisis in which banks proved their reputation was perhaps the least important thing when it came to the opportunity to make rapacious profits. I mean, it got so bad, Tess, that at one point in another TARP program a New York Fed official said to me, when they were describing the Treasury’s refusal to adopt some really basic concepts to reign in the TARP participants, he said to me, ‘you know, Neil, it seems as if Treasury’s lips are moving, but,’ the CEO of one of the investment houses, ‘Larry Fink’s words are coming out their mouth.’

Vigeland: To be fair, this was a crazy time back in 2008 and 2009, financial armageddon upon us, no one seemed to know what was going to happen. So it is easy to criticize now, but can’t you maybe just believe that people were trying to do their best under pressure of very difficult circumstances?

Barofsky: That is actually part of the fundamental problem. The lack of diversity of thought, the fact that so many of these officials come from a Wall Street background — Goldman Sachs, Bear Stearns, Merrill Lynch — meant that when confronted with a crisis they went with the only thing that they knew. You know I don’t think that these people are necessarily fundamentally evil or bad people or sinister, I think they are patriotic people who went to serve their country in the middle of a financial crisis. The problem is they don’t know anything else. They just don’t know anything other than, ‘wow, if this is what the high lords of finance are telling us, this is the best thing, then therefore it must be the best thing, and what’s good for Wall Street is what’s good for America.’ And that’s why if we have another financial crisis, we’re going to have these same problems.

Vigeland: Would you ever want to work in government again?

Barofsky: I don’t really think I’m going to have too many opportunities after this book comes out, but look I’d love to serve again if the time is right.

Vigeland: Well, let me ask you this — what was harder to go after, the Farc revolutionary forces down in Colombia which you pursued as a U.S. attorney or TARP?

Barofsky: There are a lot of similarities, but at least with TARP nobody tried to kill me.

Vigeland: Neil Barofsky is the former Inspector General in charge of oversight of TARP, also known back in the day as SIGTARP. His new book is “Bailout: An Inside Account of How Washington Abandoned Main Street While Rescuing Wall Street.” Thank you so much for joining us.

Barofsky: Thanks for having me.