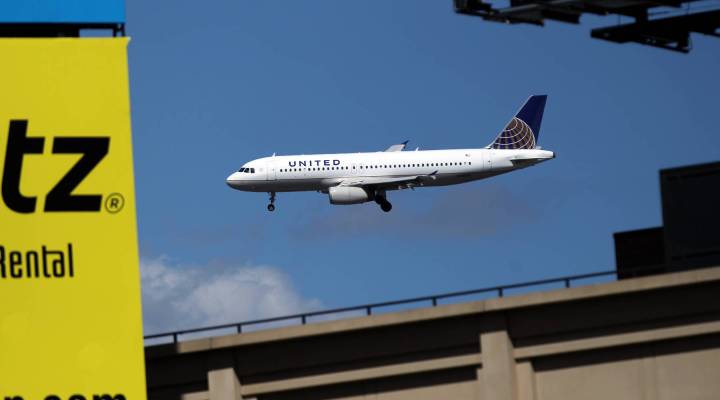 COPY
Thanks to a computer glitch yesterday, some lucky travelers were able to buy United tickets from the U.S. to Hong Kong for $40. Nick Laham/Getty Images
Mid-day Update

Thanks to a computer glitch yesterday, some lucky travelers were able to buy United tickets from the U.S. to Hong Kong for $40. Nick Laham/Getty Images
Listen Now

First to some news that could have a significant impact on our food prices: The dangerous heat forecast to continue across the midwest. That makes things pretty uncomfortable for us humans, but it is really unpleasant for corn. And this is peak time for corn pollination. Just last week, analysts were calling this year’s drought the worst since the 1980s. Now, the National Climatic Data Center is calling it the worst since the 1950s.

Pawlenty, Jindal, Portman — all those names are bouncing around this week as potential vice presidential candidates for Mitt Romney. But how much difference does a vice president even really make when it comes to shaping economic policy?

A new report from a group called the State Budget Crisis Task Force finds, well, what do you know: a crisis in state budgets. It’s an illustrious group waving the red flag. Former OMB and CBO director Alice Rivlin says even when the economy recovers, states will be fighting large deficits. Those federal cuts will likely include state and local grants. Rivlin says education and prisons are most likely to feel the squeeze.

Some of China’s biggest companies are warning that profits for the first half of this year could be cut in half. It’s the latest evidence of an economic slowdown in China and gives you a sense of how big the slowdown might be.

From one Asian slowdown to another: India has been hit especially hard by the debt crisis in Europe. The country is worried about the debt it’s accumulating because of all the imports it’s getting from China.

Well, if you want to go to China, United Airlines usually makes its frequent fliers spend upwards of a hundred thousand miles on a first class round trip ticket to Hong Kong. But thanks to a computer glitch yesterday some lucky travelers were able to buy
the tickets for just four miles and $40. United says it won’t honor the tickets. But according to USA Today new Transportation Department rules might require the airline to honor them.

Two years ago this Saturday, President Obama signed the Dodd-Frank financial reform law. Dodd-Frank followed the hurried bailout of American financial firms. Many say the bailout pulled the economy back from the brink. But the ad-hoc nature of it made clear we needed better ways of responding to — and ideally preventing — financial crises.

There’s a growing sense among economists that the housing market has finally hit bottom. Groundbreaking on new homes jumped last month at the fastest pace in three years. Housing starts, as they’re called were up 6.9 percent from May and 24 percent from a year ago.

And finally, the one-time star of the New York Knicks, the inspiration for Linsanity, Jeremy Lin has been let go by the Knicks. He will go to the Houston Rockets where he’ll reportedly get a three year contract worth $25 million. Now we don’t know whether Jeremy Lin is disappointed by the move, but I’ve got a little bit of good news for him. Forbes has just come out with a list of the cities where your paycheck will go the farthest, and Houston is number one — thanks to the low cost of living. So, Jeremy Lin, $25 million might just be enough to live on.