First, landlords are raising rents all around the country. And in a lot of cities they’re at record levels. The good news: It’s now actually cheaper to buy a house than rent in this country. Back to the bad news: Getting a loan to buy that house — it’s ain’t easy.

Sally Herships: Normally, the housing market works like this: People buy, housing prices go up. People decide to rent, because it’s cheaper, but then rents go up. A report today from real estate research firm Reis says apartment buildings are fuller than they’ve been in more than a decade. And with mortgage rates so at historic lows, normally people would be scurrying to buy houses, but that’s not happening.

Brian Lewis: I’ve seen some great loans out there. Money is on sale, and if you have access to that money it’s a great time to take advantage of it.

Brian Lewis is executive vice president of Halstead Property. Did you catch what he said about access? To get one of those cheap mortgages you need:

Lewis: Great jobs, great credit — money in the bank. Those are the three things that are going to be very sexy to banks.

Which is important for borrowers because rents are at all time highs. Nationally the average is just over $1,000 a month. But without everything a bank wants, you can look like an unattractive borrower.

Neal Pollack is 42 and lives in Austin, Texas. He says it would be cheaper to buy. But he and his wife can’t get a mortgage even though they have excellent credit and money for 20 percent down. He’s a writer who’s published six books, but mortgage lenders would prefer it if he had a regular paystub.

Neal Pollack: It’s kind of an overused term, but it’s vaguely Kafka-esque. It’s like you’ve got all your paperwork together, you’re just waiting in line. Endlessly.

For a mortgage which Pollack has been trying to get for a year. With no luck. So they’re renting.

In New York, where the average rent is now more than $2,900, I’m Sally Herships for Marketplace. 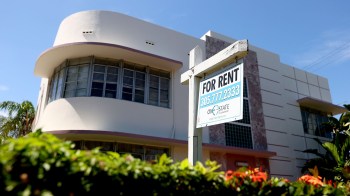