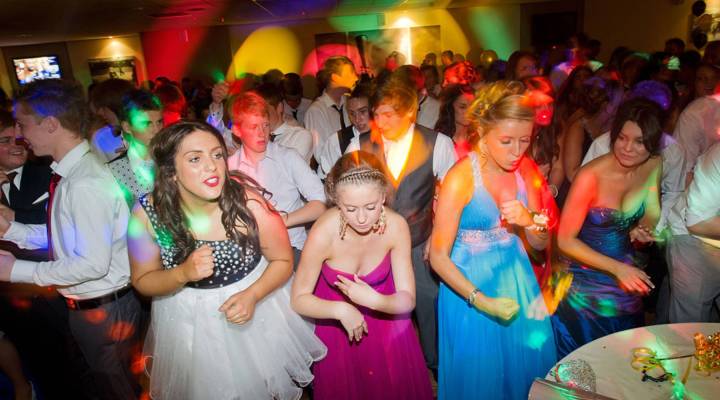 Tess Vigeland: If there’s one event that can compete for high school seniors’ attention even more than graduation, it’s prom.
Prom season’s been running for a few weeks now and parents are spending big for the occasion. No matter how tight the household budget might be.

Bridget Bodnar put on her best finery and went shopping with some soon-to-be-prom-goers.

Bridget Bodnar: The Mint Collection in Los Angeles is floor-to-ceiling rhinestones, feathers and sparkles. There’s a steady stream of high schoolers coming and going and a lot of them have mom in tow.

The Mint Collection is a dress boutique and this is prom season.

Klaudia Thompson, with a K, is a senior from a suburb of L.A. She’s done a lot of spending for the night.

Klaudia Thompson: It’s already been like $700 with just tickets and one dress. It’s my senior prom, it’s just what we’ve been waiting for for 12 years and it’s pretty much like, “This is it.”

Klaudia was shopping with her mom, also named Claudia but with a C. Mom Claudia still needs to buy her daughter shoes, flowers, pictures, transportation — on top of that $700 they’ve already spent.

That’s a lot of money for a single mom and Claudia doesn’t have a budget for the night. She’ll spend what it takes to make her daughter happy.

Claudia Thompson: Well, she earned it, she earned it. I’m excited for her. I didn’t get to go to prom, so I’m living vicariously through my daughter.

Claudia is willing to make big sacrifices to give her daughter what she wants. Two years ago, Claudia was unemployed.

Claudia: If it would have taken place back then, I think would have probably worked at McDonald’s if I had to but would have given her the same as I’m giving her now.

Judging by the number of mom-daughter pairings at the Mint Collection, there are a lot of parents like Claudia.

Kit Yarrow is a consumer psychologist at Golden Gate University in San Francisco. She says many parents are willing, even eager to break the bank for their child’s prom.

Kit Yarrow: We are finding that every year, people are spending a little more on prom. And even at a time when the economy was turning down, we still saw people really indulging in prom.

Yarrow says it’s because Americans think about prom differently now than they did a generation ago.

Yarrow: So in 1980, the average age that a girl would get married was 22. Today, it’s closer to 27 and a great percentage of people in their twenties don’t marry at all. And so, I think that what’s been happening is that prom is replacing that coming-of-age party — the wedding, the debutante ball. These things are either postponed or they’re not done anymore. And parents need in some way an occasion to celebrate their kid’s transition to adulthood and I think that that’s become the prom.

A recent poll by Visa found the average family expects to spend about $1,000 on prom.

Paula Rosenblum is an analyst with Retail Systems Research and she says there’s an element of compensation in all this new spending. She says the urge to spend on a big party is a natural reaction to the downturn of the last decade.

Paula Rosenblum: We’ve gone through uncertain times for so long that a certain amount of frugality fatigue has set in. And consumers really would prefer to open up their wallets and enjoy themselves, particularly on special life events like a prom.

She says parents who feel guilty about not being able to pay for college might be trying to make up for it on prom.

Outside the Mint Collection, I bumped into a young prom-goer called Paola. She hasn’t even bought her dress yet but she’s finding prom is already getting expensive. The ticket alone is 85 bucks.

Paola: But it’s going to end up being a hundred if I don’t pay soon.

In all she’s expecting to spend $500, a budget laid out by her parents who are footing the bill. But Paola wants to spend more, and she will if she can find a job. She says it’s important to make sure the night lives up to her high expectations.

Paola: ‘Cause it’s a night to remember, I guess you can say. I don’t know, maybe because I just saw my parents’ prom pictures, so I know that it’s going to last forever and people are going to see it when I grow old and stuff.

Her prom spending may sound excessive, but Paola’s not extravagant by nature. Her plan is to go to community college in the fall, because she wants to save money.

Paola: Yeah, that’s why I’m going to do the two-year and then hopefully transfer if the economy doesn’t get better by then, just try to transfer to anything I can at the moment.

So for her, prom is one last spending hurrah before she buckles down to frugality.