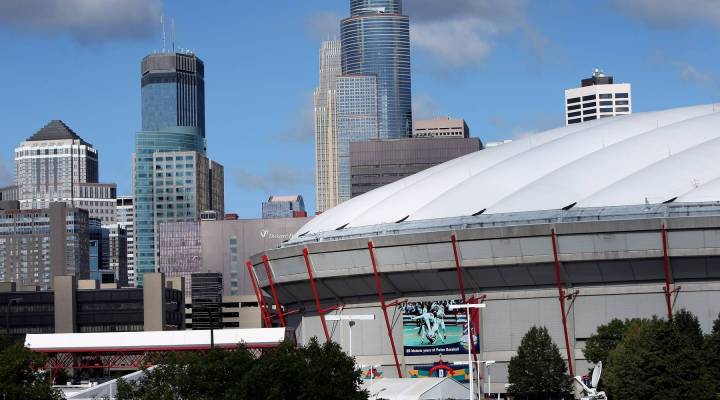 COPY
Fair skies abound outside as the Atlanta Falcons face off against the Minnesota Vikings at the Metrodome on in Minneapolis, Minn. The cost of doing business in the Midwest has finally leveled out with the South. Doug Pensinger/Getty Images
Mid-day Update

Fair skies abound outside as the Atlanta Falcons face off against the Minnesota Vikings at the Metrodome on in Minneapolis, Minn. The cost of doing business in the Midwest has finally leveled out with the South. Doug Pensinger/Getty Images
Listen Now

Moody’s Analytics says it is now almost as cheap for companies to do business in the Midwest as it is in the South. There’s long been a cost gap between the two regions thanks to traditionally higher taxes and more expensive real estate and labor in the Midwest. According to the Wall Street Journal, that gap is has narrowed dramatically in part because of an aggressive campaign of tax incentives to lure companies to Midwestern states.

A cash lifeline for the internet company Yahoo. It’s selling half its stake in Alibaba, China’s biggest online commerce company. Alibaba’s Chinese founder is buying it back for more than $7 billion.

And finally to some advice from Google’s Executive Chairman Eric Schmidt. He spoke at Boston University’s commencement yesterday and told graduates to spend one hour a day not looking at a mobile phone or a computer screen. Have a conversation, a real conversation, he said. Schmidt apparently didn’t expect those in the crowd to take his advice right away though. Some of you are probably tweeting this speech right now, he said.

There’s a parking spot coming on the market in New York City this year. It can be yours for… a million dollars. The single car, indoor spot — said to be the most expensive ever — is on east 11th Street, convenient to Union and Washington Squares. The NY Post quotes the real estate people saying the parking space could appeal to the “camera shy” business executive. If it’s just about going incognito, I’ve always found nose-glasses and a fedora work wonders and are a lot cheaper.