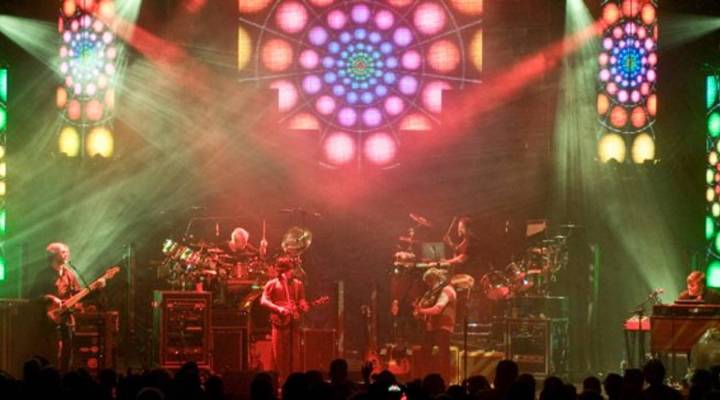 COPY
The band protests Ticketmaster's high fees by scalping their own tickets. Bassist Keith Mosley discusses the message his band is trying to send. Tobin Voggesser/NoCoast.TV

Tess Vigeland: Been to a concert lately? I’m guessing you ordered your tickets online and probably paid a healthy service charge to do it. If you hate those fees, welcome to the party.

Jam band The String Cheese Incident has spent years fighting Ticketmaster. So ahead of their upcoming show at the Greek Theater here in L.A., the band bought up a bunch of tickets from the box office, then scalped them to fans at cost on their website. Keith Moseley joins us to talk about it. He’s the band’s bass player. Welcome.

Keith Moseley: Thank you. Thanks for having me on.

Vigeland: So how exactly did you guys pull off this stunt? What’d you do?

Moseley: After we went through our own allotment of tickets there was still quite a demand from our fanbase, from our hardcore fanbase, so we actually sent some people from our management office out to L.A., wired ’em $20,000 and had them recruit some friends to stand in line and gave ’em each a handful of cash and had ’em buy tickets the old-fashioned way — stand in line at the box office.

Vigeland: Right. And this is because you had an agreement with The Greek to have some tickets that did not go through Ticketmaster?

Moseley: Correct. Yeah, we do that typically with all the venues we play. Sometimes we’re forced to jump through some hoops to make it happen and that’s kind of what happened to us here with the L.A. Greek show.

Vigeland: Well this is certainly not the first time you’ve tried to make an end-run around Ticketmaster. I don’t know, would you say this is a cause for you — would you say — as a band?

Moseley: Well, it is. We’ve really tried to cultivate our whole band experience around creating an intimate relationship with our fans. Early on we created our own ticketing company, our own merchandise company, travel agency for fans that wanted to travel and see the band. So the ticketing thing has been part of our operating system from the beginning.

Vigeland: This is something you’re losing money on though, right? Didn’t you eat part of the cost?

Moseley: We are eating part of the cost. To us, it’s worth it.

Vigeland: Who are you trying to send a message to at this point: Ticketmaster, the venues? Is this all really just symbolic or do you think that change could actually happen in this system?

Moseley: We may be sending a message or causing some ripples here and there. Really the endgame for us is to eliminate the unnecessary $10-12-15 charges that are attached to our tickets.

Vigeland: So you’re going to plan to try to do this for every show?

Moseley: You’ve got to kind of find out what the deal is and work within the parameters of different venues, but yeah. We do plan to sell our own tickets — as many as possible, as many as we can. The fans that are clued into this really seem to appreciate it and have told us continually that they would rather deal directly with us, support the band, pay less money for the same ticket than have to go through Ticketmaster.

Vigeland: Keith Moseley, bassist for The String Cheese Incident. Thanks so much for coming in and break a leg.

Moseley: Appreciate it. Thank you so much.