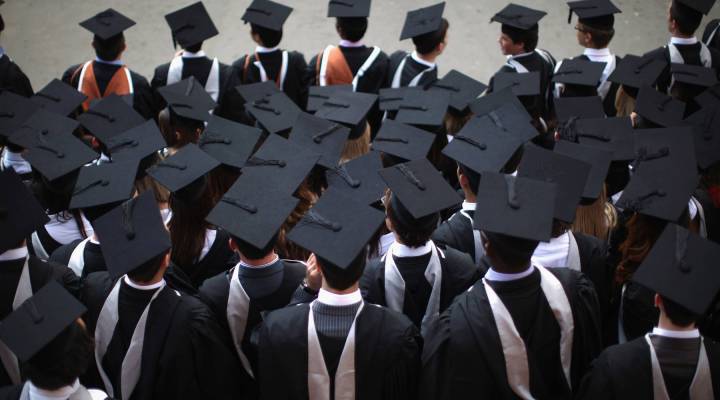 Should companies pay for advanced degrees?

More than a decade ago, United Technologies made a pledge to pay for any employee's advanced degree. It's now paid for thousands of them. What could other U.S. companies learn from the program? Christopher Furlong/Getty Images

Should companies pay for advanced degrees?

More than a decade ago, United Technologies made a pledge to pay for any employee's advanced degree. It's now paid for thousands of them. What could other U.S. companies learn from the program? Christopher Furlong/Getty Images

Stacey Vanek Smith: We spend a lot of time on this program talking about things that corporations have done wrong. Not so much about things they’re doing right. So today we thought we’d take a look at one example of an initiative from United Technologies that’s turning some heads in a good way.

Vanek Smith: So Allan, to start out very basically, what did United Technologies do?

Sloan: They did something that was very unusual. Back in 1996, when they were firing people right and left, they set up something they call an ’employee scholar program,’ which said, ‘we will pay for any advanced degree that any of our employees want to get while they’re working for us, and that way, when we have to fire them, at least they’ll have a headstart on their next job. Plus, if by some miracle they stay, they can help their career here by getting advanced degrees.’

Vanek Smith: What was the result of that program?

Sloan: Surprisingly, it actually worked. They’ve had, in the 16 years this program has existed, they’ve paid for 32,000 college degrees — which is even more than you and I have combined. And the thing that they’re now making a fuss about is, starting in 1996, they have now spent a total of $1 billion on all of this, which is getting to be real money.

Vanek Smith: Is this something that other companies could or should emulate?

Sloan: Well, they could and they should — but they won’t.

Sloan: Because it might cost them money, and they might have to be candid. The thing about the United Technologies program that I like is you don’t have to take a degree related to anything you’re doing. So I mean, that’s not bad — I’m trying to get Fortune to do that, but I can’t figure out what my next life is, so I don’t know what I want to study.

Vanek Smith: Finally Allan, answer me this: Why should other companies do this? What would your pitch be to the good people at Fortune?

Sloan: One is, it helps you attract and keep good people. The second thing is that if you make it possible for people to get advanced degrees, that could help them in the company and help you in the company — and in fact, there are statistics that United Technologies shared with me showing its retention rate and the rate of promotion among the people who had used this program was higher than among the others.

Vanek Smith: So there are reasons?

Sloan: Yeah, but it involves long-term and thinking, and we know how that’s going out of style in most places.