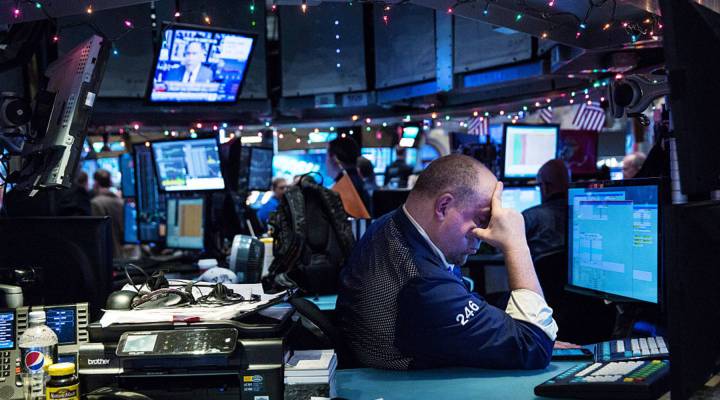 COPY
A trader works on the floor of the New York Stock Exchange. Andrew Burton/Getty Images

Maybe the U.S. and global economies keep ticking along until the end of time and the markets remain forever chill. But that’s not what history tells us. It’s also not the view of the biggest hedge fund in the world: Bridgewater Associates.

In recent weeks, it’s been circulating a warning. Bridgewater co-chief investment officer Greg Jensen and two of his colleagues say that, “We are bearish on almost all financial assets while markets are still pricing in Goldilocks conditions” and that “2019 is setting up to be a dangerous period for the economy.”

Washington Post columnist Allan Sloan got a look at what you might call, well not a red alert, but maybe a yellow alert. Below is an edited transcript of the conversation.

David Brancaccio: So listen, first of all, it’s lovely living in these Goldilocks conditions — things not too hot, things not too cold. The stock market’s happy, right?

Allan Sloan: Right. Lots of classes of U.S. stocks making new highs. The bond market is stable. You’re actually starting to get interest income that you can actually measure. Life is good. It’s spring. Let’s go out and celebrate.

Brancaccio: And luckily trees grow to the sky. This is going to continue ad infinitum and the prices of things like stocks reflect this notion of, “Things are good right now.”

Brancaccio: Well, it’s not just me. Tell me about Bridgewater Associates. This is a pretty big hedge fund, right?

Sloan: Right, it is the biggest hedge fund in the U.S. It’s been enormously successful. It has a terrific record on making money for its investors and it came out with a report that said basically we think everything is overpriced and you better look out.

Brancaccio: So the suggestion from this document is the thinking at the big hedge fund is a year from now, the smile is going to be wiped off our faces.

Sloan: That is correct — if not earlier.

Brancaccio: I mean, you don’t like the term stocks are overvalued, but they’re thinking the direction is down on some of this stuff.

Sloan: Right, they think U.S. stocks generally speaking are overvalued. U.S. bonds generally speaking are overvalued because interest rates are going to go higher than people expect. And despite the idea that the Federal Reserve controls everything and it’s smooth, they suspect there will be hiccups and problems and possibly grief in the economy. And all of this will work its way in a nasty fashion into stock and bond prices.

Brancaccio: Now, they don’t say what the specific catalyst is going to be, it’s just they have a sense that optimism is driving this and eventually someone notices that it’s not the fundamentals.

Sloan: That’s right. And if they do what the catalyst would be, you can be sure they wouldn’t put it in a report.