University of California San Diego researchers think the tiny, self-propelled submarines they’ve been working on can help clean up oil spills. I’m not talking the kind of sub James Cameron likes to ride to the depths of sea. No, these microsubs are really, REALLY mico – 10 times smaller than the width of a human hair. The idea is that these little buggers would be deployed after an oil spill to collect and deposit oil droplets in a safe place.

And get this, the nano-engineered subs are self-propelled by bubbles! They just toot-toot along under their own bubble-tooting power to drop off oil, clean up the ocean, and high five dolphins(*). The BBC points out that this is the same technology recently used to deliver medicine: “Last year, researchers at Penn State University demonstrated micromachines capable of bringing drugs to certain areas of the body via the bloodstream.” 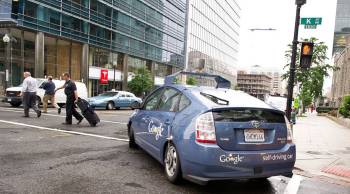 Honk if you’re a real person