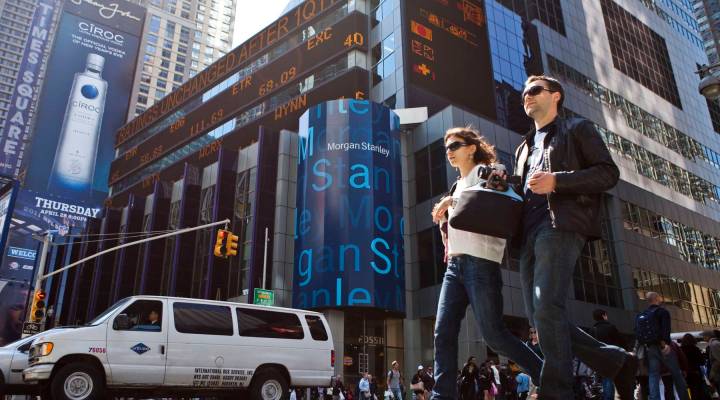 PODCAST: Morgan Stanley and other earnings, a hampster hotel

PODCAST: Morgan Stanley and other earnings, a hampster hotel

Holiday sales of the iPhone 4S started to boost Verizon’s revenue in the latest quarter, as subscribers settled in to paying their new monthly bills. Morgan Stanley reported a first-quarter loss on a big accounting charge, but without the charge its earnings beat analysts’ forecasts. The parent company of American Airlines says it lost $1.7 billion in the first quarter, mostly on costs related to its bankruptcy restructuring.

We got earnings last night from Yum Brands — the company that owns Taco Bell, Pizza Hut and KFC. Is said profits were up 73 percent last quarter, helped in part by strong sales of those new Doritos Locos Tacos at Taco Bell. The New York Times reported flat first-quarter revenue because of deteriorating print ad sales and trouble at its digital property About.com. Today, Nokia of Finland, the big maker of mobile phone handsets reported a big loss–1 and three quarter billion dollars–for its most recent quarter.  Apple and Samsung continue to nail them.  Microsoft profits come out later.

There’s news today that the number of people signing up for unemployment benefits in the last week fell, but not by as much as experts were predicting. And  a four-week average is actually up.  All this adds a sense that finding a job is getting slightly tougher in the U.S.

On our unscientific scale for the1 to 10 for the European financial crisis, 10 being “cataclysm”…we’re going to keep it at a wary number six today.  The Wall Street Journal has a lead headline talking about Europe rescue system to inject cash into banks is running out of steam.  But, as we told you,  troubled  Spain was able to sell some government bonds without too much trouble, which brought some calm into the picture in Europe.

If you feel like a caged animal at work, now you can be one when you go on vacation as well. A hotel in France is offering guests the chance to live life like a hamster. Seriously. You’ll have an exercise wheel in your room. And you’ll feast on a meal of organic hamster grains and sip water on all fours. All for a 143 dollars a night. Book now while supplies last — or something.

Is this the final frontier when it comes to the fetishization of Apple Computer products? Some artists have asked a company that manufactures artificial smells to distill the aroma of a newly opened Macbook pro.  Kinda like that new car scent, only it’s the smell of laptop.  The LA Times reporter who broke the story went around sniffing her other electronic equipment, but please, don’t do that right now.  It’s too early.  The smell company, Air Aroma, does not plan to market its creation.  Yet.