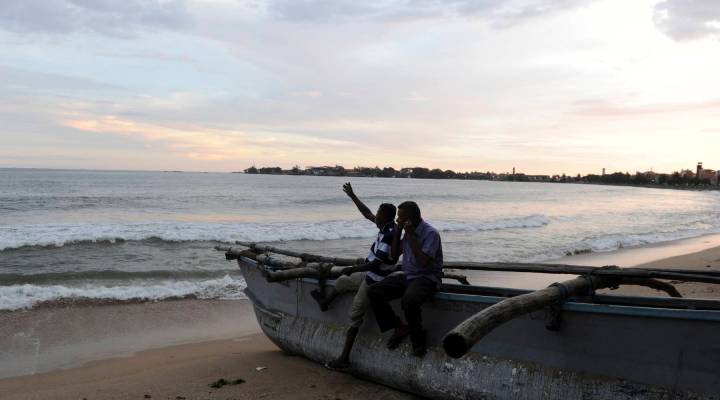 COPY
Sri Lankan men sit on a boat at a beach in Galle on April 11, 2012. Ishara S.KODIKARA/AFP/Getty Images
Mid-day Update

Sri Lankan men sit on a boat at a beach in Galle on April 11, 2012. Ishara S.KODIKARA/AFP/Getty Images
Listen Now

There were several massive earthquakes off the coast of Indonesia today triggering tsunami warnings across the Indian Ocean. Those warnings have been cancelled, and no serious damage has been reported so far.

Applications for U.S. home mortgages faded last week after as demand for refinancing declined, an industry group said on Wednesday.

To La Crescenta, here in Southern California. Where one man was reminded just how dangerous texting while walking can be. A TV helicopter was filming a 500 pound black bear that was roaming through a residential neighborhood yesterday, when along came the unsuspecting walk-and-texter. Luckily, he saw the bear just in time — and promptly ran in the other direction.

Three quarters of employers do a background check before hiring.  Now a consumer group says too much of that background info is bunk. The National Consumer Law Center has a new report this morning that says the job background screening industry is like “The Wild West” and lacks accountability. Among the problems:  someone with a similar name has a rap sheet and you don’t.   Or reports that fail to note when criminal charges are dismissed.  Job seekers have the right to correct bad information, but to paraphrase the report…just try it some time.