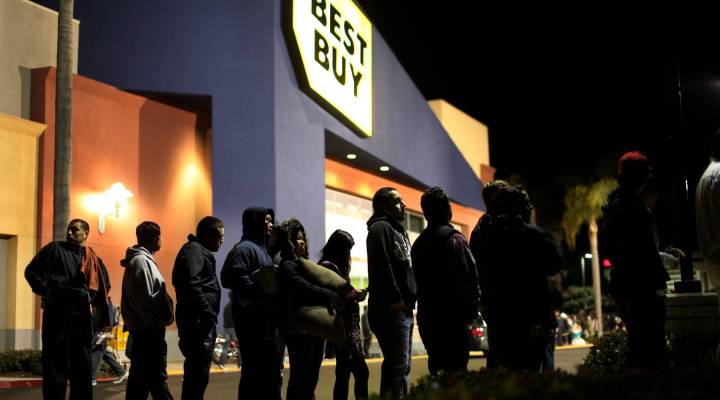 COPY
Shoppers wait in line at a Best Buy store on November 24, 2011 San Diego, Calif. The company has announced that it is closing 50 big box stores after losing almost $2 billion over the last few months. Sandy Huffaker/Getty Images
Mid-day Update

Shoppers wait in line at a Best Buy store on November 24, 2011 San Diego, Calif. The company has announced that it is closing 50 big box stores after losing almost $2 billion over the last few months. Sandy Huffaker/Getty Images
Listen Now

Good economic news this morning. The number of people filing for unemployment fell last week, to the lowest level since 2008. And the economy grew 3 percent last quarter, the fastest growth we’ve seen since early 2010.

Leaders from five of the world’s fastest growing economies are meeting in India today. That would be Brazil, Russia, India, China and South Africa. The BRICS, as they’re called, are considering doing more business using their own currencies to insulate themselves from fluctuations in the value of the U.S. dollar.

Best Buy said today that it is closing 50 big box stores after losing almost $2 billion over the last few months.

The Organization for Economic Cooperation and Development said today that the U.S. economy and European economies will diverge this year, as the U.S. grows and Europe shrinks.

It appears a lot of devils are wearing Prada. The Italian fashion house said this morning its profits jumped 72 percent last year.

More parents are taking out student loans for their kids kindergarten tuition. The Wall Street Journal’s Smart Money reports loans to pay for private kindergartens are up 10 percent from last year. And tuition isn’t cheap. It’ll cost you about 10,000 dollars to rub elbows with the exclusive block-stacking set.

To the U.K. where a parrot named Chico was stolen over the weekend. But the owner says it’s possible the thieves won’t want to keep the bird around for long. That’s because, the bird’s favorite activity is singing a classic hit by the band Queen. Yup, Chico loves her some Bohemian Rhapsody. The owner tells the Sun newspaper, “I don’t think the people who have her will appreciate her squawking ‘Scaramouche’ at them all the time.”