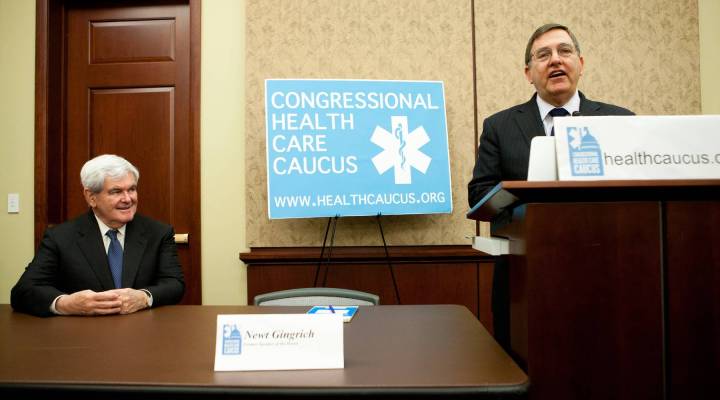 Stacey Vanek Smith: Today is the final day the Supreme Court will hear arguments about the legality of the Obama Administration’s health care reform.

Michael Burgess is a Republican congressman from Texas and a doctor. He’s been an outspoken critic of the Affordable Care Act and he joins me now. Good morning, congressman.

Michael Burgess: Good morning, glad to be with you this morning.

Smith: Congressman, you have come out against the Affordable Care Act and have said that the U.S. can’t withstand the costs of the law. Can we afford to do nothing, though? We’ve been hearing a lot about how health care costs have skyrocketed in the past ten years and are sort of spiraling out of control.

Burgess: Well, the fact is, we were lied to about how much this law would cost. But here’s the deal: we could have accomplished some of the same things by taking very incremental but very real steps — perhaps a series of five, seven, or nine pieces of legislation — that could have been done over these past two years, and it would not have changed some of the fundamental nature of the relationship between the federal government and the American people, as Justice Kennedy brought up yesterday, and it wouldn’t have destroyed the profession of medicine. So I think there were some possibilities for some big wins there. Unfortunately, politics intervened two years ago and no one was interested in working together, and we are where we are — and it’s a pretty big mess.

Smith: There are a lot of people who have gotten, or who will get, insurance under the Affordable Care Act. If the law is overturned, what about the uninsured?

Burgess: Well, you know, if you listened to the arguments yesterday at the Supreme Court, they talked about how the uninsured are driving our costs up so much. That’s nonsense. The big cost driver is the fact that Medicare and Medicaid are underfunded because the government does not pay its way on those programs that it already does.

Look, we all know that in the Medicaid system today, they underpay physicians so poorly that Medicaid patients have a hard time getting in to actually see someone. So what do they do? They go to the emergency room. Yes, they go there with a card in hand that shows they have coverage, but they’re still not accessing cost-effective health care, and it still drives up costs to the system significantly.

Smith: In order to control the health care costs, what would be a better solution in your opinion?

Burgess: Remember that one size is not going to fit everyone. I do a health savings account; I’ve done one for years. I think that is a very reasonable way to go about for people who are not on Medicare who are entering the working world. Sure, I think everyone ought to have a catastrophic policy that covers them for those never-events that we all never want to think about, but which we all know we’re at risk for daily. But I don’t think the government has a role in requiring that.

Smith: Congressman Michael Burgess is a Republican from Texas and he is also a doctor. Congressman thank you for talking with us.

Burgess: Thank you for having me.