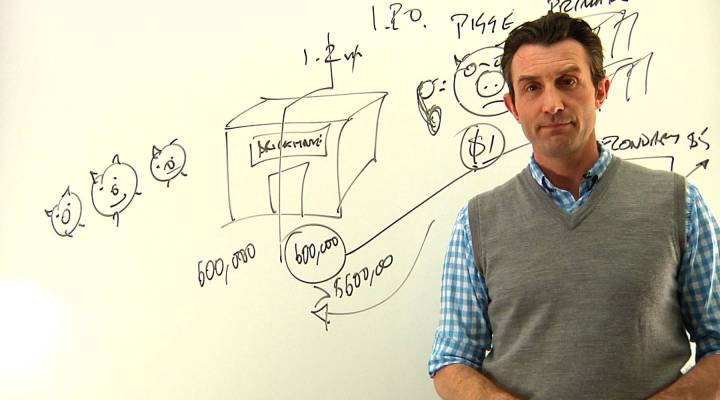 Say it, luxuriate in it. Let it roll off your tongue like honey. Eyyyyye — peeeeee — ohhhhhh! There it is! The promise of riches beyond your wildest dreams! The magical transformation of a company into a cash machine! It’s nothing short of corporate alchemy!

Sorry to disappoint you, but… it’s not really. IPO stands for initial public offering. And all that means is it’s the first time a company’s shares are sold to the public.

Whether they’re private or public, companies always have shares. Remember the story of the three little pigs (the Disney version)? Once they got rid of the big bad wolf, they decided to pool their savings and turn their brick house into a hotel. The youngest did the food and beverage, the middle pig ran the casino, and the eldest acted as general manager. They co-owned the hotel together, which meant there were just three shareholders in the business.

One day they decide to build a nightclub on the roof of the hotel. Problem is, they haven’t got enough money. They could get a loan, but they were nearly savaged by Wolf Savings the last time round, so forget that!

A friend advises them to sell shares in the company. How do we do that, the pigs wonder. We don’t know who to sell to, how much to charge or anything. The friend suggests going to Pigge Bank, an investment bank specializing in porcine business matters.

Well, you’re gonna need a lot more than three shares, Mr. Pigge says. So let’s multiply the number of shares each of you hold. Let’s say you now hold 400,000 shares each (We can do that? — Sure! It’s your company!). Now there’s 1.2 million shares in the company total. I recommend you sell half. If you agree to work with me, I’ll underwrite your IPO, which means that for a small fee I’ll undertake to sell 600,000 shares in your hotel to the public. You will own the remaining half of the company, so you’ll have 200,000 shares each.

Now when Mr. Pigge says he’s selling shares to the public, he’s not talking about going out onto the street and hawking shares out of a wheelbarrow to all and sundry. The “public” means huge investment companies — like pension funds, hedge funds, banks, private equity funds and the like. Institutional investors, they’re also called. Mr. Pigge deals with these institutions all the time, so he knows who’s a likely buyer and who’s not. So he calls around and finds out how interested these people are, and how much they might be willing to pay for a slice of the 3 Little Pigs hotel.

Eventually he gets an answer. A buck a share. And on February 14, the hotel sells 600,000 shares to the institutions. It’s the IPO, the initial public offering. Initial, because it’s the first time the shares are sold. Public, because it’s going to people outside the private share partnership that existed before, and offering, because that’s the jargon for selling a share: sellers offer at one price, and buyers bid at another. This IPO is also called the primary market, again, because it’s the first time the shares are sold. But whatever the jargon, the upshot is that the pigs have sold half their hotel for $600,000.

Well, that’s OK for them, but what about the rest of us!? How can we get some of those shares? The fact is, that the general public, people like you and me, have to wait until after the IPO ’til we can buy. We buy our shares in what’s called the secondary market. That’s when the shares are put up for sale on an exchange, like the NYSE or Nasdaq. These days, institutions make many of their IPO shares available for sale on exchanges almost immediately, which is why we see that so called “IPO pop.” In fact, the IPO is never a pop, it’s a price fixed by the investment bank. It’s actually a post-IPO pop. And sometimes it’s more of a slump. The reason institutions put the shares on the secondary market is that they’re hoping to sell them at a profit. Maybe a thumping profit. But sometimes they lose money. Leaving us badly in need of a drink.

The IPO industrial complex is starting to get worried