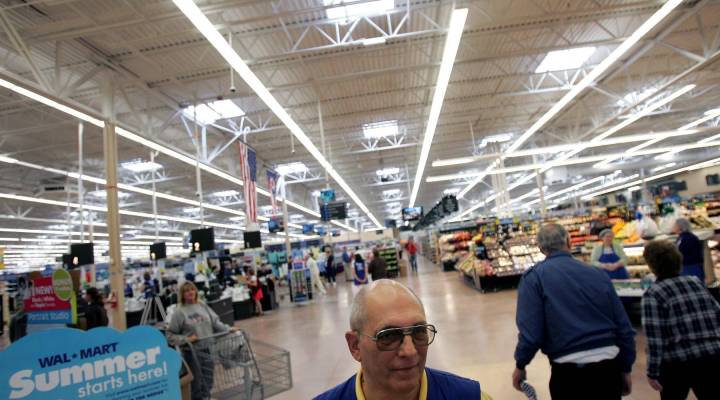 COPY
A Wal-Mart greeter is seen welcoming customers in Bowling Green, Ohio. Walmart stores will say goodbye to their greeters on the overnight shift in a cost-cutting measure. J.D. Pooley/Getty Images
Mid-day Update

A Wal-Mart greeter is seen welcoming customers in Bowling Green, Ohio. Walmart stores will say goodbye to their greeters on the overnight shift in a cost-cutting measure. J.D. Pooley/Getty Images
Listen Now

We just found out the number of people applying for unemployment benefits ticked up by 21,000 last week. The four week average is 377,500. To put that in some context:  for a falling unemployment rate, that number should be closer to 375,000.

Mobile phone maker Nokia had a terrible end of 2011. The company says sales fell 21 percent. It lost more than a billion dollars.

Wal-Mart is saying goodbye to its signature greeters. At least during the overnight hours. The company says its doing so to save money.

We found out today that Mario and Luigi don’t have the appeal they used to. Nintendo had a rough 2011, reporting its first annual loss. Who’ll save the Princess?

After the Federal Reserve said yesterday it’s keeping interest rates near zero for three more years. The Fed also left open the option of another round of bond buying to boost lending.

To Groupon, which is being called a snake oil salesman in the U.K. — and with good reason. The company advertised a deal last year for Wrinkle Killer Snake Serum. It claimed customers who rubbed the snake oil on their skin would remove wrinkles and look younger. But the Advertising Standards Agency in the UK ruled that Groupon couldn’t substantiate the claim, and therefore shouldn’t sell snake oil anymore.

An out of work artist in Ireland is living in a billion euro home — not worth a billion euros, but made of them. According to Reuters, Frank Buckley has built an apartment out of bricks of shredded Euros. There’s an upside to using euros as building material: his home is so warm, he says he doesn’t need a blanket. The euro, it seems, makes great insulation.

School lunches are about to get healthier. More vegetables, less fat. The USDA just released the first new set of food guidelines in 15 years. But, school lunches won’t be all kale and beets. French fries still count as a vegetable. So does Pizza. But, not to fret. The new rules do insist that your kid’s “pizza vegetable” can’t be the only vegetable on the plate.