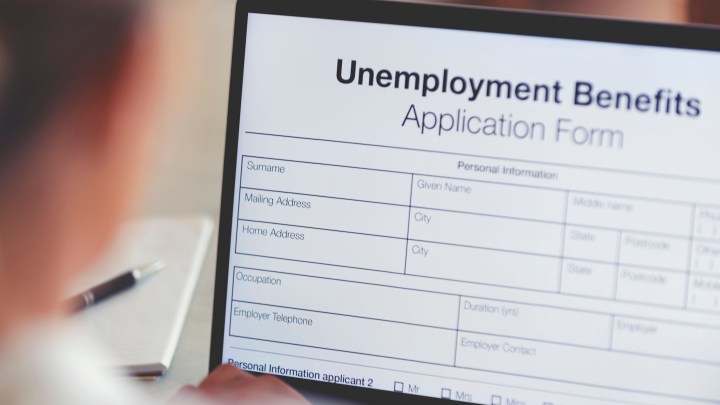 The year or so since the pandemic began has been a stressful and overwhelming one for millions of people who’ve lost their jobs. It’s also been an intense one for the people whose job it is to process unemployment benefits.

The week before the pandemic hit, there were just 634 initial claims for unemployment benefits in the whole state of Maine.

“The week the pandemic hit, we had 21,000,” said Laura Fortman, the commissioner of labor in Maine. “The following week, there were over 30,000 initial claims.”

Fortman also held that job during the Great Recession.

“And I thought that that was the worst thing we would ever go through,” she said. “And there was absolutely no comparison.”

When the pandemic started, Fortman said, there were only 13 people on staff taking unemployment calls.

“We did everything that we could to quickly shift staff within our department,” she said.

They brought in staff from other departments, too, and hired a call center. Within a few weeks, about 100 people were on the job.

“But again, these were not folks who had any unemployment insurance experience,” Fortman said.

And the claims just kept coming.

Spesshardt said that even now, a year into the pandemic, it hasn’t gotten much easier.

“Every day it’s answering questions or trying to answer questions from a huge number of individuals trying to get in to get assistance, and not always being able to provide them with good news,” Spesshardt said.

Lately there’s actually been a lot of bad news. More than 230,000 people in Colorado had their unemployment benefits lapse in December. That happened because, Spesshardt said, Congress and former President Donald Trump waited until the last minute to extend them, and then they tweaked some of the rules.

“So now you have to go in and adjust all that programming, make sure it’s running appropriately, before you can release it for individuals to start receiving benefits. Those all take time,” Spesshardt said.

In Colorado, some people whose benefits lapsed in December still aren’t getting anything, even though they’re eligible.

And, Spesshardt is concerned that all of this might happen again in a few weeks, because those benefits Congress extended in December are set to expire in mid-March.

“I’m looking at a calendar here, and I’d say the end of the month would be a really good date to have any new extensions in place,” she said.

That would give states enough time to keep benefits flowing.