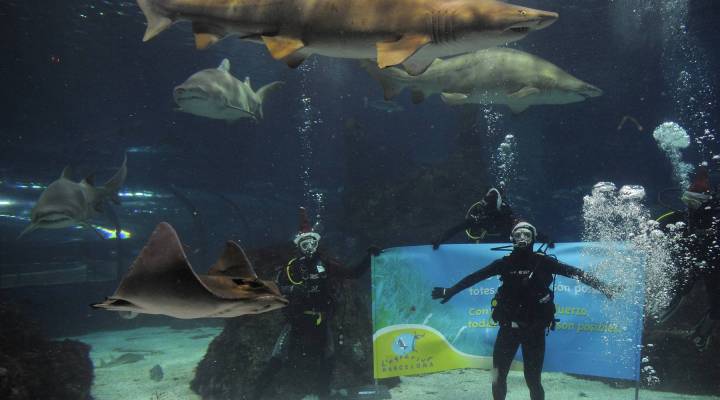 Entrepreneurs present their case to a "shark tank" of successful businessmen in the ABC show. LLUIS GENE/AFP/Getty Images

Entrepreneurs present their case to a "shark tank" of successful businessmen in the ABC show. LLUIS GENE/AFP/Getty Images

Tess Vigeland: Got an idea for a new business? Maybe you just need some seed money to get going and then you’re off to becoming a millionaire, right? Well for some lucky entrepreneurs — though that depends on your definition of “luck” — there’s a reality show made just for you.

Clip from ABC’s “Shark Tank:” I could ask for 50 percent and say, “Let’s be even.” I asked for only 40 percent out of respect for your talent, I just want to bring my 35 years of savvy business experience that took a thousand bucks and turned it into $66 million, which was no accident and bring it to your table to help you.

A new season of “Shark Tank” premieres this weekend on ABC. A panel of five wealthy business owners sits in judgment as wannabes pitch their ideas. Barbara Corcoran is one of those judges. Her qualifications are that she turned a thousand-dollar loan into a $6 billion real estate empire. Welcome to the program.

Barbara Corcoran: Thank you so much.

Vigeland: So you started off with just a thousand dollars to start your business. Where did that money come from?

Corcoran: I slept with my boyfriend and he gave it to me.

Vigeland: Wow, so it works.

Corcoran: It certainly does work. But let me tell ya, I woulda slept with him anyway. He was so handsome, 10 years older than me, so sexy. He didn’t have to give me the money, but once it was there, boy I grabbed it.

Vigeland: All right, well, so that’s perhaps for a different show.

Corcoran: OK, let’s do this again.

Vigeland: So tell us how you ended up parlaying that thousand dollars into a huge conglomeration.

Corcoran: I think I’ll drop the 25 now, even though I’m on board on it, OK? Among 10,000 million other things that worked and didn’t work along the way.

Vigeland: Sure. What about just plain learning the mechanics of owning your own business? There are a lot of money skills that you need to put into practice if you’re doing that. Did you have those skills and if not, how did you get them?

Corcoran: Absolutely. I never could read a financial statement. If I would talk to a bank, there was never a chance I was gonna get a loan, because I didn’t know what the heck I was talking about. That was not my skill. My skill was marketing and people and people management. But one of those great advantages to having that skill was I was able to identify good talent.

Vigeland: Well, so being able to identify good talent is your primary job on the show “Shark Tank.” You were the only woman investor on that panel. And I wonder if there may be one or two elements that you think stand out in what you’re really looking for from potential winners?

Corcoran: Absolutely. There’s something that happens on “Shark Tank” that you don’t know if you’re watching at home — and that is, when that poor entrepreneur (and when I say “poor entrepreneur,” I don’t mean financially, it’s just that they don’t know what’s gonna hit them. When they walk through that shark tank and stand on that stage, the producer plays a little trick on them. They say to them before they get on the stage, “Don’t speak until a shark talks to you.” And what do they tell the sharks in our ears, because we have those little ear pieces? They say, “Don’t talk to them for five minutes.” Now what do you think happens to that person who’s already neurotic with giant cameras in their face zooming around them. They fall apart for the most part, and by the time they start pitching, they only have half their power left. Do you know what, for the most part, the great majority of them, you know what I’m doing? I’m deciding already if I have any interest in investing in that business or not, because I’m watching that individual and how good they are under pressure.

Vigeland: Just while they’re being silent on stage for five minutes.

Corcoran: It’s terrible! Put any grown man or grown woman in that position — it ain’t so easy, because you don’t know what the agenda is. But here’s what I’m looking for: I’m looking for someone who’s gonna be under pressure, because what I’ve learned in business, it’s not about the high times, the good times, the creative ideas, the winners, the whatever it is. It’s really when all the chips are against you and the economy has fallen apart, when there are no buyers out there, when you owe money to everybody, you know you’re gonna go out of business ’cause there’s no way you can hang on for a minute longer. That’s when you need someone who is just not going to give up.

Vigeland: When we’re talking about small business owners, entrepreneurs, is there still a difference in the challenges that women face versus men?

Corcoran: I know the right answer is to say yes. Of my own personal experience was that I had a huge advantage being a woman, building my big company. I feel I have a huge advantage on “Shark Tank” being a female with all men. I wish there was another female.

Corcoran: Because I have a different perspective. When I built the Corcoran Group and walked into a room of all the old boy networks who owned, controlled the real estate in New York City, I was the only girl in a skirt and so I could really ramp it up and wear a short skirt — which I religiously did and make it red — and go into that room with a red power suit — really too short — in high heels, because thank God I have good legs. So, why was that an advantage? They didn’t even have to know my name; I was just the “woman” or the “girl” or the “one in the short skirt.” Who cares? As long as I was noticed. I already got my undue attention that those guys in the most expensive $5,000 suits could never get.

On “Shark Tank,” all right?, I’m the only female. Half of the people don’t even know my name. They go “Oh, you’re the woman on ‘Shark Tank’!” They can’t say that to the guys “You’re the guy on ‘Shark Tank’!” They’ve gotta remember their name, they’ve gotta remember what they do. So, it’s a huge advantage on “Shark Tank” to be female. I frankly think it should be four women on that show and one man and they’d do a lot more business for sure! But that’s just not the way it is.

Vigeland: Barbara, thanks so much for coming in.

Corcoran: My pleasure, thank you.

Vigeland: Barbara Corcoran is founder of The Corcoran Group real estate company, author of the book “Shark Tales” and panelist on the reality show “Shark Tank” on ABC.