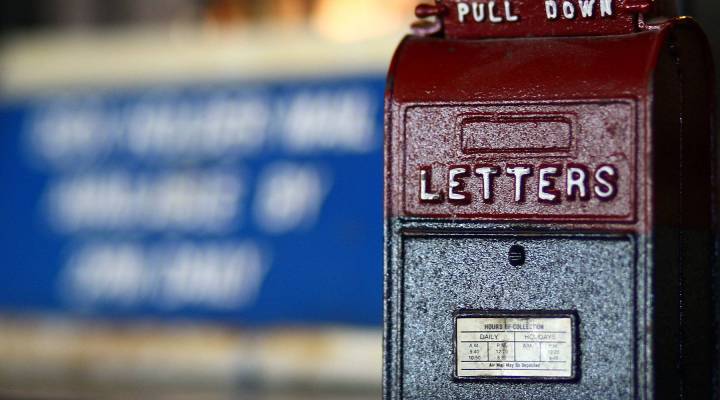 Letters: Saving as much as you can

Let us know what you think about the show. Contact us! Mark Wilson/Getty Images

Letters: Saving as much as you can

Let us know what you think about the show. Contact us! Mark Wilson/Getty Images

Tess Vigeland: Well we’ve answered some of your questions here in this segment, but before we leave you dear listener, we’d like to reach into the Marketplace Money mailbag and see what you’ve been saying about our show recently. And joining me to help do that is our senior producer Paddy Hirsch!

Vigeland: Welcome back to the studio.

Hirsch: Thank you very much.

Vigeland: How are people feeling about the show? Are they likin’ it? Not likin’ it?

Hirsch: I think they’re likin’ it. We got a well-stuffed mailbag this week. I was pretty impressed by some of the response to some of the stories there last week.

Vigeland: Good. What are folks saying?

Hirsch: Well, there’s a lot of positives. Some a little negative. And I think one of the ones that attracted my eye first was a letter from Roger Porzig from Orange Park in Fla. He says, “Tess is on her soapbox again. It’s absurd to limit the amount you put into retirement funds.”

Vigeland: That’s what I said.

Vigeland: Yeah, I did. I got on my soapbox last week in our call-in segment. Someone wondering why there was a limit on the amount of money you can put into a retirement fund, a 401(k) retirement fund we will point out, which is pre-tax.

Hirsch: Well let’s actually hear what you did actually say on the air Tess.

Vigeland: The key here is that the limit is on your pre-tax income. But there’s nothing that says that you can’t set aside in a savings account or in a brokerage account any amount of money that you choose to.

Vigeland: I did say that.

Hirsch: Exactly. We are big supporters of not limiting the amount of money you put into a retirement fund. You should save as much as you can.

Vigeland: Right. And you may not be able to put every dollar that you want to put away into a pre-tax account, a 401(k) or an IRA. But as I just said from last week, there’s no limit on what you can put into after-tax savings vehicles. And in fact, we encourage you to do both.

Hirsch: Max it out if you can.

Vigeland: All right. What’s next?

Hirsch: There was a very popular story that we did which was the “Forget You Fund.” This is when you spoke to Meg Favreau of WiseBread.com.

Vigeland: That was a lot of fun. I love having her on the show. And I know from Facebook that we have a lot of friends on Facebook who very much enjoyed that. Peter Young said that he and his colleague have both been in a group for nearly 15 years. And they’ve been saving aggressively the whole time, and they use the term, well, “F U Money” is how they say it. The letter “F” and the letter “U.”

Hirsch: Right. That’s so… well while we’re on this subject, we got a letter from Kristen O’Brien of St. Paul, Minn. who objected to Meg’s, should we say, potty mouth. She didn’t like the phrase that she had. We sort of leavened it and called it the “Forget You Fund,” but she used another term that Kristen wasn’t too happy about.

Vigeland: She did. Well, we will bear that mind, but I think most folks seemed to enjoy that particular segment. I did want to point that related to that that one of my followers on Twitter, Ron Feiertag — or as I know him, @ronsupportsyou. We all go by, you know, our first name is “@.”

Hirsch: Why don’t you guys just call yourself “I @firetag.” That’s a great handle!

Vigeland: I like it, he supports me. But anyway, he pointed out — and I don’t know if you know this — but Humphrey Bogart actually was famous for having a, shall we call it, a Forget You Fund. Did you know that?

Hirsch: I did not know that.

Vigeland: I didn’t either.

Hirsch: Did he need one?

Vigeland: Well, apparently he did. But he actually did not call it that, he called it the other name that we will not mention. But apparently, he said that — and this is quoting here — “the only reason to have money is to tell any S.O.B. in the world to go to hell.” Well, I should probably say, “H-E-double toothpicks.”

Hirsch: OK. While we’re on the subject of the Forget You Fund, Mike Naeve of Denver Colo. wrote in. Hequestionedd whether or not a $1,000 is a good-enough emergency fund. “In what century was that?” he said. “Make it $10,000.

Vigeland: It is a stepping stone. And I think when we suggest numbers, make them something that the majority of the audience can handle, at least as a starting point.

Hirsch: Because you know, a lot of people have difficulty saving.

Vigeland: If you can start with $1,000, that is a great place to start. Absolutely wonderful. See if you can do that and then build from there.

Vigeland: Exactly. Ooooh, I like that. I’m gonna use that. Well, we thank you all for writing in. Please continue to do so, tell us what you like, what you don’t like. We can take it! Thank you so much Paddy.