What is it about the economy that bugs you?

What is it about the economy that bugs you?

Kai Ryssdal: All the talk about private equity notwithstanding, if you ask around the regular folk, the economy’s right at the top of the list of things Americans care about. But the American economy’s a giant beast, a multifaceted thing. So what exactly is it about the economy that people worry about?

Every week, we find out how Americans feel about things with the help of Frank Newport. He’s the editor in chief at Gallup. It’s a segment we call Attitude Check. Frank, good to have you back again.

Ryssdal: So if the economy is the biggest problem that people are thinking of, what is it about the economy — what do we know?

Newport: We ask Americans just that question: What worries you most about the economy? Because we were scratching our heads as well. We know Americans — although they’re a little more positive — are in angst about the economy; they continue to be. So what is it? I can tell you what they responded. No shock, number one: over a quarter of Americans spontaneously said it was jobs and unemployment. Number two, the second category was the debt and deficit. And number three was politics. People mentioned Obama not handling the things right on the economy — those are Republicans — and a lot of Democrats said Congress and bickering in Washington. So actually, right up there with the big two — jobs and debt — is concern about bickering in D.C.

Ryssdal: Let me drill down a little bit in order. That first item, jobs and employment: Do you know if people feel differently about this whether they have jobs or not?

Newport: Generally speaking, people who are unemployed — and actually, it’s a small percent, 8 percent of Americans are more worried about jobs than those who are not. But again, the bulk of Americans have jobs, and that’s what drives the overall concern. So it’s a lot of people out there with jobs who still say that what worries them most is jobs.

Ryssdal: On the debt issue, that number two item: Is it the short-term problem we seem to be in with annual deficits and the trillions of dollars, or is the longer-term, we’re just borrowing way much more than we’re taking in?

Newport: We think it’s the latter. These are much more likely to be Republicans, Kai, who volunteer that the biggest economic worry is the debt and deficit. And generally, Republicans are thinking about the big picture in deficit and long-term borrowing and what-have-you, not the short-term inability to balance the budget.

Ryssdal: Right. And finally, this number three item, politics: Is it to the point now, do you think, where in November, there will be a throw-the-bums-out movement?

Newport: Well, but which bums?

Newport: It was a lot easier in 2010 because the Democrats controlled both the House and the Senate, and they at least threw out the people who controlled the House and turned it over to Republicans. But now we have divided government, so we don’t know. It’s a fascinating question — people are really down on politics, but who they’re going to throw out is going to be the fascinating question that we’ll monitor as the year goes on.

Ryssdal: I wanted to ask you quickly before we go about an item that you guys talked about in the first week of January here — you’re seeing people are more confident about their standard of living and the possibility that it’s going to rise since the new year?

Newport: Absolutely. This is important — it may be short-term — but we had the highest standard of living index that we have measured at Gallup since early in 2008. We have over half of Americans who say their standard of living is getting better, and we have to go back, as I mentioned, to the early months of January and February of 2008 to find optimism that high about standard of living. Well, something’s in the water, at least initially in this great year of 2012, making Americans pretty positive.

Ryssdal: Frank Newport, the editor in chief at Gallup. Our segment that we do with them is called Attitude Check. Frank, thanks a lot. 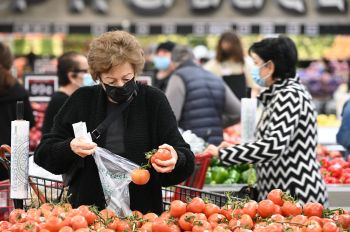