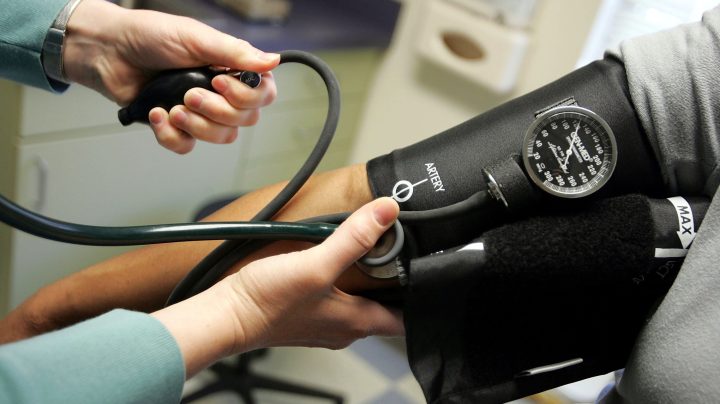 COPY
According to the U.S. Census Bureau, the percentage of Americans going without health insurance rose last year for the first time this decade. Joe Raedle/Getty Images

According to the U.S. Census Bureau, the percentage of Americans going without health insurance rose last year for the first time this decade. Joe Raedle/Getty Images
Listen Now

Despite falling poverty rates and rising incomes, the number of Americans lacking health insurance increased last year for the first time in nearly a decade. The U.S. Census Bureau reported Tuesday that 8.5% of Americans, or 27.5 million people, did not have health insurance during 2018 compared with 7.9% in 2017. “Marketplace” host Kai Ryssdal talked with Sarah Kliff, investigative reporter for The New York Times, about why the uninsured rate might be increasing while the economy is strong. The following is an edited transcript of their conversation.

Kai Ryssdal: So with what else is in this census report today, we want to get some perspective on this health care thing from you and the uninsured levels. First of all, were you surprised given the rest of the data that’s out?

Sarah Kliff: I was. Usually when you have a report that shows a strong economy, strong income, you have an increase in health insurance. But this is a report where you have people’s earnings going up, but the uninsured rate is going up, too. So that was definitely a surprise to me.

Ryssdal: OK, so what gives? How come?

Kliff: That is a great question that I think a lot of experts and economists are puzzling over. The other thing that’s notable about this report is it’s the first one where we’ve seen the uninsured rate increase since the passage of the Affordable Care Act. So something different is definitely happening. It has to do, I think, with the economy, it has to do with how the Trump administration treats the Affordable Care Act. There’s a lot of different factors going on that seemed to be driving the uninsured rate up.

Ryssdal: You do a lot of investigative work on people’s insurance bills, right? You go out on Twitter and ask them to send their bills. You’ve done a bunch of this coverage. Do you see this reflected in your research and in your investigative reporting?

Kliff: Yeah. I mean, one of the things you certainly see are people questioning whether insurance is a good deal as deductibles rise. You know, I talked to people who say, “I paid hundreds in premiums each month, and then I have like a $6,000 deductible. Is it even worth it?” The other thing I see a lot of, and I think what’s reflected in this report, is that you do see people gaining jobs, but those jobs tend to be low wage, and low-wage jobs often don’t come with health benefits. So that’s another place where people are kind of falling into the cracks and helps kind of square that circle of why you might see incomes getting better but the uninsured rate, you know, getting worse.

Ryssdal: It’s kind of a disconnect, right? I mean, it’s a little bit like the Fed and inflation. They kind of go, “Yeah, I don’t know what’s up with inflation.” And here you’ve got the same thing with jobs and health care.

Ryssdal: Characterize it for me. Is it troubling? I mean, you know, you do this professionally.

Kliff: I think it is. I think the other part of this report we haven’t talked about is that we see a significant decline in Medicaid coverage. That’s the program that covers low-income Americans. It’s a public program. And that’s actually where you see the steepest decline. And so that suggests you might have some tightening of eligibility rules that have been approved by the Trump administration. You might have people who think Obamacare was repealed are going to look for coverage. So it definitely is a troubling report because, you know, the people who are losing Medicaid, they tend to be a population that has lower income.

Ryssdal: Crystal ball it now: As we head into 2020 and health care becomes a campaign issue, does this muddy the water or clear it up?

Kliff: I think it muddies the water. It raises some questions about, you know, who are these people who are losing health insurance? Can a strong economy also ensure that Americans’ health care bills get paid? And this report is suggesting maybe it doesn’t. Maybe people are feeling a little more secure with their new jobs, but they don’t have that security around their medical bills. So I think that’s definitely a big area of concern that’ll play into, you know, the election as we get underway.