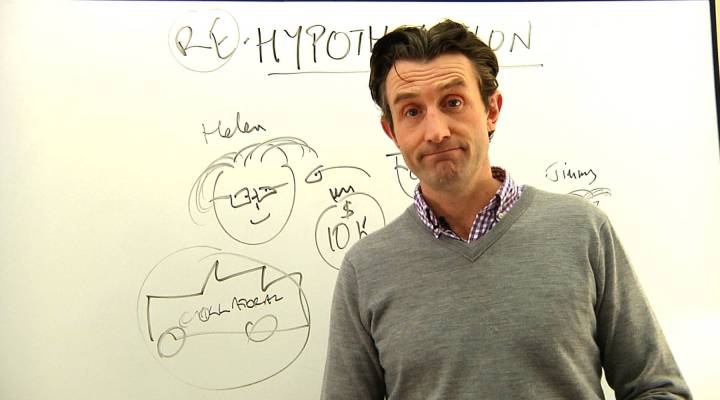 If ever there was a word that you’d expect to find in a Harry Potter novel, it’s re-hypothecation. This a classic example of financial people inventing impenetrable terminology to make their business look like a black art. “Oooh, re-hypothecation, it must be magic!”

The term “re-hypothecation” came up a lot during the MF Global meltdown. It’s quite a common term in the securities market – but what does it mean?

To explain re-hypothecation, we have to explain hypothecation. And hypothecation is pretty simple. It’s when you lend someone money and let the borrower keep the collateral.

This is not an unusual thing. In fact, it’s entirely normal. If I borrow money from Billy the Banker to buy a car, the car is the collateral for the loan. I can use the vehicle, but if I fail to make the interest payments, Billy will come and my T-bird away. Same goes for my house, if I borrow money to buy that, too. I take out a loan, but instead of giving the collateral for that loan to the lender, or placing it in escrow, I, the borrower, hold on to it. Hypothecation.

Interesting use of language here. When a borrower defaults on a car or home loan and a bank seizes the collateral, it’s called a repossession. RE-possession, implying that the bank assumed it had ownership the entire time. In other words, its hypothesis was that it owns the cars.

Re-hypothecation is like a retread of the car loan. Say Billy the Banker wants to borrow $10,000 from Jimmy the Shark for a trip to Las Vegas. Billy has nothing to give up for collateral (he rents his home and leases his car), so he says to Jimmy, “I lent Paddy $10,000 to buy his car. Can I use that car as collateral?” If Jimmy agrees, then he’s essentially agreeing to lend money using collateral that’s already being used as collateral! That’s re-hypothecation.

Actually, now I think about it, maybe it is magic after all!